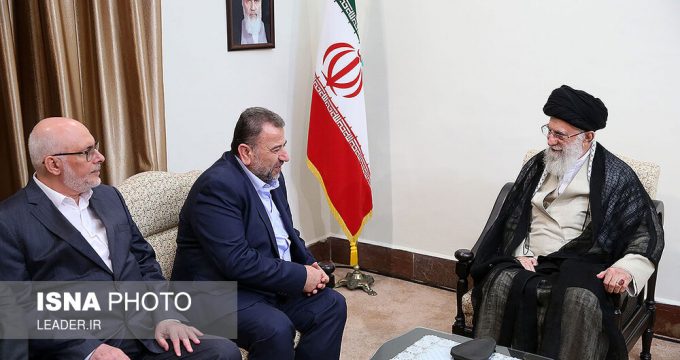 Ayatollah Khamenei made the remarks as he received deputy head of the Hamas Political Bureau Salih al-Aruri as well as a letter from Hamas chief Ismail Haniyeh in Tehran Monday.

“Victory will not be achieved without resistance and struggle, and we believe according to the indubitable divine promise that the issue of Palestine will definitely be in the interest of the Palestinian people and the Islamic world,” the Leader said.

“Sayyed Hassan Nasrallah’s saying that ‘God willing, I will say my prayers in al-Aqsa Mosque’ is a completely practical and realizable hope for us,” the Leader said of the Hezbollah chief’s longing.

Ayatollah Khamenei said the resistance of the Palestinian people in the besieged Gaza Strip and the occupied West Bank promises “victory and conquest”.

“God has promised assistance and victory to those who are steadfast in His path. However, the fulfillment of this promise has requirements, the most important of which is Jihad, struggle and tireless effort in various political, cultural, intellectual, economic and military dimensions.”

Ayatollah Khamenei touched on the “treacherous” initiative proposed by US President Donald Trump, dubbed as the “deal of the century”, saying there is need for promotional, cultural and intellectual work to confront it.

The Leader was apparently referring to a two-day conference held in Bahrain last month, aimed at rallying support for an “investment” plan in the Palestinian Territories as the first part of the “deal of the century”.

The plan has met broad disdain from Palestinians and others in the Arab world although regional US allies such as Saudi Arabia discreetly support it.

“Another way of resisting this conspiracy is to make the people of Palestine feel progress that this has happened altogether, thanks to God,” Ayatollah Khamenei said.

“In the not too distant past, the Palestinians fought with rocks, but today, instead of rocks, they are equipped with precision-guided missiles, and this means the feeling of progress,” he added.

Ayatollah Khamenei stressed that Iran has no reservation with respect to supporting the Palestinian issue.

“We have always stated our views on Palestine clearly and transparently, and even our friends which disagree with us on this issue in the international arena know that the Islamic Republic is quite serious on the Palestinian issue.”