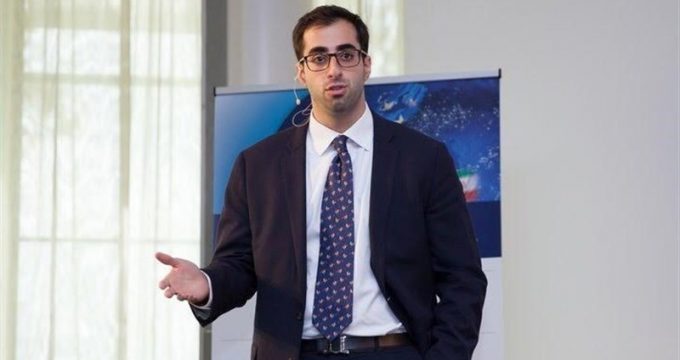 Tasnim – The founder of media company Bourse & Bazaar said the Trump administration’s approach toward the 2015 nuclear deal between Tehran and world powers is incoherent.

“The Trump administration’s narrative on Iran’s nuclear program is incoherent and this reflects that different figures in the administration have different assessments of what satisfactory non-proliferation controls entail,” Esfandyar Batmanghelidj told Tasnim.

Esfandyar Batmanghelidj is Founder and Publisher of Bourse & Bazaar, a media company that supports business diplomacy between Europe and Iran through publishing, research, and events, such as the annual Europe-Iran Forum. Aside from his contributions to Bourse & Bazaar’s own platform, Esfandyar’s writing on Iranian business and politics has been published in Foreign Policy, Bloomberg Opinion, Al Monitor, Quartz, and Asia Times. His scholarship on Iranian political economy has been published in the Encyclopedia Iranica and the journal Iranian Studies. Esfandyar is a graduate of Columbia University.

Tasnim: Iran, which had been fully complying with all of its commitments despite the US pullout from the JCPOA and the European shortfalls, announced on July 7 that it was set to increase enrichment purity to levels higher than 3.67 percent after the European parties missed the deadline. European Union foreign policy chief Federica Mogherini said recently that the signatories to the 2015 nuclear deal do not view Tehran’s move to scale back some of its commitments under the agreement as significant noncompliance. The US, however, is trying to magnify this issue by insisting that Iran is moving toward atomic bombs and that its nuclear program is not peaceful. What are your thoughts on this?

Batmanghelidj: So far, European officials have understood that Iran’s moves to scale back its compliance with the JCPOA are intended to be gradual and reversible. However, there are risks to Iran’s approach. On one hand, escalation, whether around the nuclear deal or other points of tension, helps make sure that the Iran file remains a priority at the highest levels in European governments, increasing the likelihood that Iran can get the significant political and economic support it needs to address US pressure. But, on the other hand, reduced compliance with the JCPOA and actions such as the seizure of tankers will provide a justification to European officials and politicians who, like many US figures, are skeptical of Iran’s non-proliferation intentions and concerned about its regional role. As the escalation continues, the voices who argue that Europe should join the US maximum pressure campaign on Iran will gain influence.

Tasnim: US President Donald Trump has repeatedly said that Iran “can’t have nuclear weapons”. Iranian officials and experts argue that the US’ main aim is not to halt the country’s nuclear and military programs but to deprive it of nuclear technology and know-how. What are your thoughts on this?

Batmanghelidj: The Trump administration’s narrative on Iran’s nuclear program is incoherent and this reflects that different figures in the administration have different assessments of what satisfactory non-proliferation controls entail. But the lack of consensus presents an opportunity for Iran, which can use direct negotiations to shape the view of Iran’s nuclear program. It is likely that Trump could be personally convinced to accept a deal close in form to the JCPOA as he is simply looking for a political win. But some in his administration will try to prevent new negotiations for precisely this reason.

Tasnim: As you know, France, Germany, and Britain launched INSTEX in January. It only became operational last month and has been criticized by Tehran for having major limitations. Just 10 EU states are members and the mechanism’s initial credit line of several million euros is a fraction of EU-Iran trade, which stood at more than €20bn annually before the US sanctions. How much do you think the EU is serious about this trade mechanism? What is behind this foot-dragging?

Batmanghelidj: I have no doubt that Europe is serious about the INSTEX mechanism. Though its development feels slow, Europe has worked remarkably quickly to create a state-owned mechanism with ten shareholders and an innovative structure. Those who are disappointed that the mechanism will not be linked to Iran’s oil exports need to consider that INSTEX is a specific tool for a specific problem. The European companies operating in Iran employ thousands of Iranians, import and produce important products and technologies, and contribute hundreds of millions of euros to the Iranian economy as the result of direct investment. European executives have made it clear that INSTEX provides a payment solution and political protection which can help their companies remain in Iran in the face of huge pressure from the US. It would be a mistake to reject INSTEX because it doesn’t solve all of Iran’s economic problems—it is part of the solution.

Tasnim: Do you think that the JCPOA could be saved? Do EU nations have enough authority to salvage the international deal?