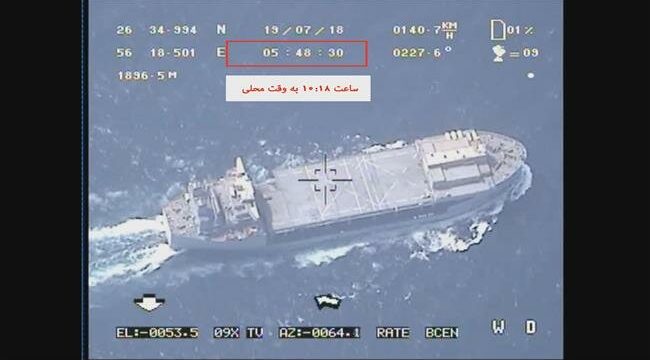 Press TV – Iran’s Islamic Revolution Guards Corps (IRGC) has released footage captured by an Iranian drone flying over the Strait of Hormuz and monitoring a United States Navy vessel, belying a claim by Washington that the unmanned aircraft was shot down by the American forces.

The IRGC’s Public Relations Department said Friday that the footage had been released with the aim of exposing Washington’s “lies.”

US President Donald Trump claimed on Thursday that the drone had been shot down after it flew to within 900 meters the US navy’s USS Boxer amphibious assault ship and ignored “multiple calls to stand down.”

Later, the Pentagon claimed the warship had taken “defensive action” against an Iranian drone at 10 a.m. local time (0530 GMT) on Thursday.

The IRGC said the American warships had been “fully and precisely” monitored for three hours, from the moment they entered the Strait of Hormuz, and that the Corps’ drone bases had detected and recorded “no unconventional and threatening action” by the US forces on the USS Boxer accompanied by five vessels during that period.

In an earlier statement, which the IRGC had released to announce its plan to release the footage, the elite force said the Iranian drone had successfully transmitted pictures of the US warship before and even after the time when the Americans claim they shot down the unmanned aerial aircraft (UAV), and then returned to its base safe and sound.