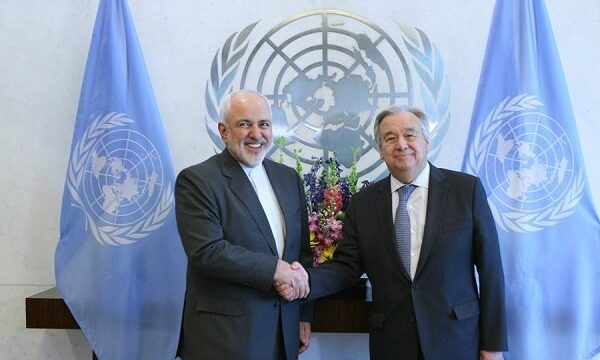 The US imposed restrictions on the staff of the Islamic Republic of Iran’ diplomatic Mission at the United Nations, tension in the region, and a reduction in Iran’s commitments to the JCPOA were discussed in the meeting, Iran’s foreign ministry said.

According to a note by the United States’ Mission to the United Nations that was exposed to some media, the staff of the permanent Mission of the Islamic Republic of Iran at the United Nations and their first-degree relatives should commute within a specified area.

The illegal seizure of the tanker carrying Iranian oil by UK, regional issues, including the latest developments in Syria, Yemen, and Afghanistan, were among topics discussed between Zarif and UN chief.

The head of the foreign policy apparatus of the Islamic Republic of Iran arrived in New York on Sunday to attend the United Nations Economic and Social Council meeting, and is scheduled to head to Caracas, the capital of Venezuela, on Friday to attend the NAM. Nicaragua and Bolivia will be the next destination for this delicate journey.

Foreign Minister Mohammad Javad Zarif said on Wednesday that it was the Americans who left the negotiating table and they can return as they know how to return.

Zarif who is in New York to attend the annual meeting of the United Nations Economic and Social Council (ECOSOC) made the remarks in an interview with Bloomberg late on Wednesday.

Rejecting the US claim that Iran is seeking to build nuclear bomb, he said that Iran has never been and will never be after nuclear bomb, as Supreme Leader of the Islamic Revolution Ayatollah Seyyed Aki Khamenei has banned it in a religious Fatwa (decree).

Asked about seizure of the tanker carrying Iranian oil in the international waterway of Gibraltar, the top diplomat said that UK was in no way in a position to seize it and this is a sheer maritime piracy.