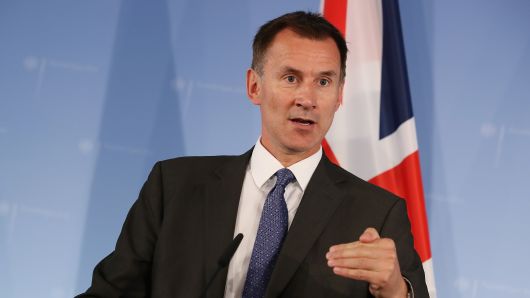 Reuters – British Foreign Secretary Jeremy Hunt said on Monday that there was still time to save the Iran nuclear deal and that despite the United States being Britain’s closest ally it disagreed on how to handle the Iran crisis.

“Iran is still a good year away from developing a nuclear bomb. There is still some closing, but small window to keep the deal alive,” Hunt told reporters on arrival for a foreign ministers’ meeting in Brussels.

The Brussels meeting will seek to flesh out how to convince Iran and the United States to reduce tensions and initiate a dialogue amid fears that the 2015 deal is close to collapse.

U.S.-Iranian tensions have worsened since U.S. President Donald Trump decided last year to abandon the nuclear deal under which Iran agreed to curtail its atomic program in return for relief from economic sanctions crippling its economy.

In reaction to the re-imposition of tough U.S. sanctions, which have notably targeted Iran’s main oil revenue stream, Tehran has scaled back on some of its nuclear commitments under the deal, leading the European parties to the pact, France, Britain and Germany, to warn it about not fully complying with the terms.

When asked whether the European powers would seek to penalize Iran for breaking parts of its nuclear commitments, Hunt said they would seek a meeting of the parties to deal with it.

“We will and there’s something called a joint commission, which is the mechanism set up in the deal which is what happens when one side thinks the other side has breached it, that will happen very soon,” he said.

The three powers, who are party to the deal alongside Russia and China, have sought to defuse the tensions, which culminated in a plan for U.S. air strikes on Iran last month that Trump called off at the last minute.

Hunt, who is vying to become British Prime Minister, said that while he agreed with the United States on finding a long-term solution to Iran’s regional influence, he disagreed on Washington’s current approach.

“What the U.S. knows is that we consider them our closest ally, we believe the alliance between the UK and the U.S. has been the foundation of global peace and prosperity over the last 75 years, but friends sometimes disagree,” he said.

“This is one of the very rare occasions when we do disagree, but that doesn’t mean we don’t work very closely with them in pursuit of peace.”