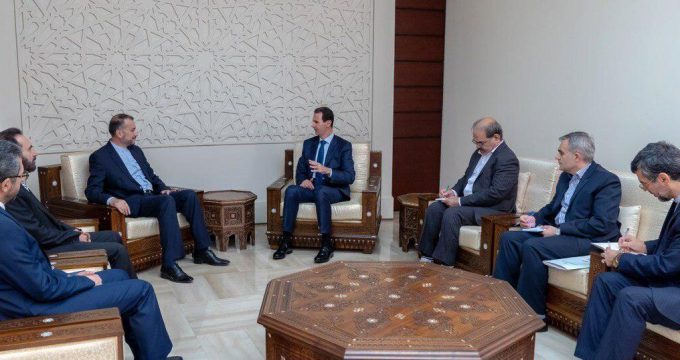 IRNA – Syrian President Bashar al-Assad in a meeting with Hossein Amir Abdollahian, Special Assistant to the Speaker of the Iranian Parliament on International Affairs, reaffirmed Damascus’ support for Iran against the US threats, saying that Washington’s actions against Iran are illegal.

The Syrian president wrote on Monday on his Twitter page that Amir Abdollahian briefed Assad on the latest developments in Iran’s nuclear case and the policies that the Iranian authorities have taken to protect the Iranian nation in the face of US aggressive policies.

Welcoming the special assistant to the speaker of the Iranian parliament speaker and the accompanying delegation, the Syrian president once again emphasized on Damascus support for Iran against the foreign threats, and described the United States’ actions against the Iranian people as illegal.

During the visit, the two sides also discussed bilateral relations between Syria and Iran, the war on terrorism in Syria and the situation in the region.

Also speaking during the meeting with the Iran’s high-ranking official in Damascus, Syrian Deputy Prime Minister and Foreign Minister Walid Muallem pointed to the strategic relationship between the two countries, and underscored the importance of strengthening and maintaining these high-level relations with bilateral coordination and consultation.

The two sides also spoke about developments in the region and the ways to face challenges, especially the unilateral sanctions by the US, against the Iranian and Syrian nations in pursuing the interests of the Zionist regime.

While appreciating Iran’s stance in support of Syria’s sovereignty and the country’s independence and territorial integrity, the Syrian foreign minister lauded the brotherly and fraternal nation, and Iran’s leadership for continued support of Syria in the war on terrorism against the country, which is targeting the stability of the region and the world and the successes achieved in Syria are considered the victory of Damascus and its allies.

Amir Abdollahian, for his part, emphasized that relations between Iran and Syria are long-lasting and that the two countries are in a same camp, and that the challenges and plots that target them have heightened the motivation to defend their rights in the face of the hegemonic efforts that have targeted the whole region, including the Syrian people.