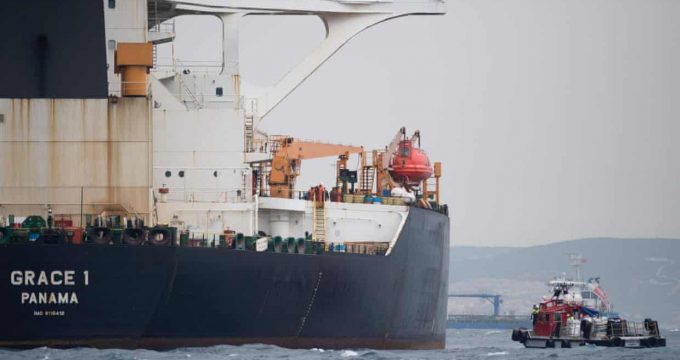 The UK must stand up to Trump over Iran

The Guardian|Eskandar Sadeghi-Boroujerdi – The US is threatening stability in the Middle East. Britain must support the Iran nuclear deal

Not for the first time, nor certainly the last, the Gulf is a veritable tinderbox. The immediate reason for the increase in tensions is the Royal Marines’ seizure of an Iranian tanker that was allegedly en route to Syria, in violation of EU sanctions. Rather than defuse the situation, the Tory leadership contender and foreign secretary, Jeremy Hunt, was quick to resort to sabre-rattling and a reassertion of British militarism on the high seas. For some Iranians this reawakens bitter memories of the UK’s infamous oil blockade in the early 1950s, culminating in the overthrow of the popular prime minister, Mohammad Mosaddegh. The very same prime minister who dared to nationalise the Anglo-Iranian Oil Company, better known today as BP. In any case, what with seized ships in the Mediterranean and trouble in the Strait of Hormuz there is a danger of missing the wood for the trees in explaining what has brought about this crisis.

The nature of Trump’s endgame is anyone’s guess. He most likely has little idea himself Ultimately, it is that Donald Trump made it a central part of his foreign policy platform to destroy the Iranian nuclear deal, known as the Joint Comprehensive Plan of Action (JCPOA). It was a landmark non-proliferation agreement, and perhaps the signal foreign policy achievement of Barack Obama. The JCPOA was concluded in July 2015 after more than a decade-long impasse; an impasse that brought us to the brink of full-blown war on more than one occasion, and that involved cycles of brinkmanship that benefited no one, least of all a region still suffering the effects of imperial hubris in Iraq, Afghanistan, Yemen and Libya.

Almost from his first day in office Trump set about eroding the entire rationale for Iran’s signing up to the deal. He started by undermining civil aviation deals, which were a key sweetener of the JCPOA, as well as threatening foreign companies looking to invest in the country. At the same time he was applying various sanctions, even while the US continued to be a signatory. Since abandoning the deal in May 2018, the Trump administration’s “maximum pressure” strategy, an economic war by any other name, has mercilessly targeted the Iranian energy, civil aviation, military and banking sectors – including the country’s central bank. When the Trump administration’s special representative for Iran, Brian Hook, was asked whether food and medicines would be exempt, he nonchalantly replied that the responsibility for any shortages lay with the Iranians.