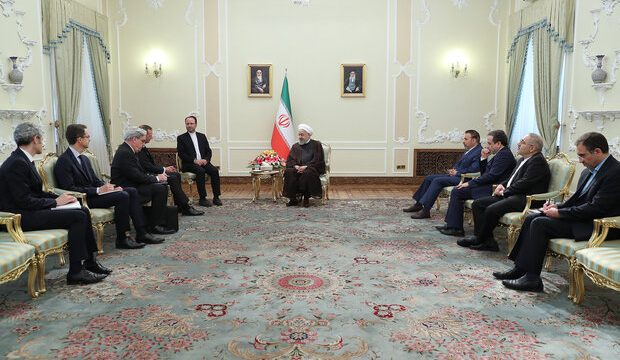 MNA – The Iranian president has expressed hope that the parties to the JCPOA would abide by their commitments, stressing that the door for diplomacy and negotiations is still wide open.

President Hassan Rouhani made the remarks on Wednesday afternoon in a meeting with the visiting French President Emmanuel Macron’s top diplomatic adviser Emmanuel Bonne in Tehran.

In the meeting, Rouhani expressed his gratitude to the efforts initiated by his French counterpart as well as his message, saying “Iran has left the door for diplomacy and negotiations fully open and we hope that the parties to the JCPOA would seize the opportunity very well to reach the desirable point which is full implementation of the JCPOA.”

He stressed “the main goal of the Islamic Republic of Iran is that the commitments stipulated under the JCPOA be fully implemented by its parties, and if they live up to their commitments, Iran will take new steps in completing its commitments.”

In the same meeting, Advisor to the President of France Emmanuel Bonne presented the written message of President Emmanuel Macron to President Rouhani.