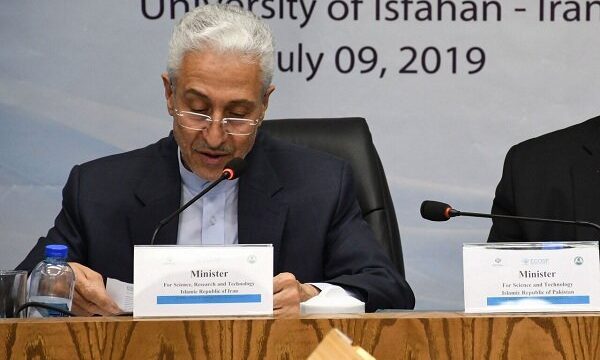 MNA – Minister of Science, Research and Technology Mansour Gholami said that the brutal and anti-human rights sanctions of the US have made it harder to exchange scientific and technological information, while knowledge, science and technology are not sanctionable.

He made the remarks at the 4th meeting of Board of Trustees members of the Economic Cooperation Organization Science Foundation (ECOSF) on Tuesday.

Gholami said that cooperation in technology and innovation field should be planned considering their economic and benefits aspects in the ECO region.

Countries in the region need to enter newer and more serious areas of joint scientific and technological cooperation, he added.

Referring to the brutal US sanctions against Iran, he mentioned that knowledge, science and technology are not sanctionable.

ECOSF is an inter-governmental organization comprised of 10 Muslim countries—Afghanistan, Pakistan, Azerbaijan, Turkmenistan, Kazakhstan, Kyrgyzstan, Turkmenistan, Uzbekistan, Turkey and Iran. The main goal of the foundation is to contribute to economic development with promotion of science, technology and innovation.

The 4th meeting of Board of Trustees members of the Economic Cooperation Organization Science Foundation (ECOSF) kicked off Monday in Isfahan.

ECO, embracing 360 million people (one fourth of the world Muslim population) is the biggest economic body of the Muslim world.