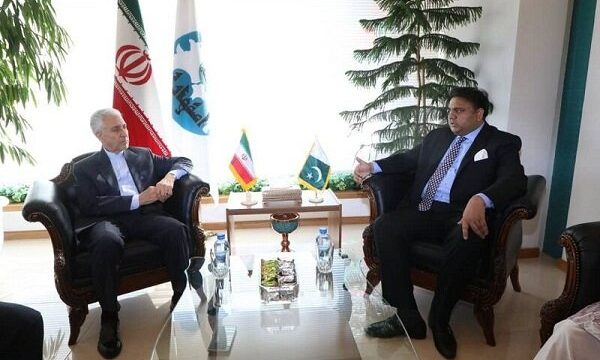 Iranian Minister of Science, Research and Technology Mansour Gholami met and held talks with Pakistan’s Ministry of Science and Technology Chaudhry Fawad Hussain on the sideline of the 4th meeting of Board of Trustees members of the Economic Cooperation Organization Science Foundation (ECOSF) on Tuesday.

Referring to the good capacities of Iran in the academic and research sectors, he mentioned that the exchange of professors and students, as well as the implementation of joint research projects are among the cooperation fields between the universities of Iran and Pakistan.

Pakistan’s Ministry of Science and Technology, for his part, stressed on Pakistan’s readiness to develop scientific relations with Iran, adding that there are good areas of cooperation in different sectors of technology such as oil, agriculture, industry, medicine, nanotechnology, agriculture and irrigation between the two countries.

ECOSF is an inter-governmental organization comprised of 10 Muslim countries—Afghanistan, Pakistan, Azerbaijan, Turkmenistan, Kazakhstan, Kyrgyzstan, Turkmenistan, Uzbekistan, Turkey and Iran. The main goal of the foundation is to contribute to economic development with promotion of science, technology and innovation.

The 4th meeting of Board of Trustees members of the Economic Cooperation Organization Science Foundation (ECOSF) kicked off Monday in Isfahan.

ECO, embracing 360 million people (one fourth of the world Muslim population) is the biggest economic body of the Muslim world.