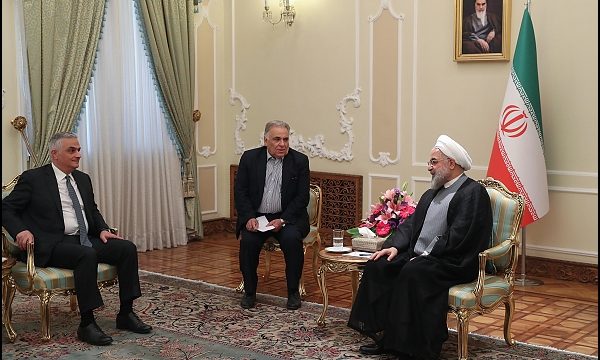 Iran proposes use of national currencies in trade with Armenia

In a Wednesday meeting with Deputy Prime Minister of Armenia Mher Grigoryan in Tehran, President Rouhani stressed the need for efforts to boost bilateral trade ties and economic cooperation.

“The economic relations would be enhanced in light of banking ties, and we can facilitate and accelerate the links between the merchants of the two countries by using the national currencies (of Iran and Armenia),” the president added.

Pointing to the ample opportunities for trade ties between the two neighbors, President Rouhani said Iran, Armenia and the other regional nations can work together in the energy industry and power generation, and transportation.

He also noted that Iran, Armenia and Georgia can connect the Persian Gulf and Sea of Oman to the Black Sea, saying the route would strengthen ties among the neighbors.

Tehran and Yerevan can expand relations despite the US sanctions, the president stated, and expressed confidence that Iran will emerge victorious in the “unequal confrontation” with the US.

For his part, the Armenian deputy prime minister said the results of the energy and trade agreements between Tehran and Yerevan will materialize in the near future.

Grigoryan also pointed to Armenia’s rotating presidency of the Eurasian Economic Union (EAEU), saying, “We feel responsible for the promotion of Iran’s relations with Eurasia, and will do our utmost to achieve that goal.”

Back in February, Armenian Prime Minister Nikol Pashinyan visited Iran with a high-ranking delegation, held talks with senior Iranian officials, and signed a number of agreements.

In one of the meetings, Leader of the Islamic Revolution Ayatollah Seyed Ali Khamenei hailed Iran and Armenia as good neighbors that enjoy historical relations, stressing the necessity to increase the level of economic cooperation.

“Contrary to what the US desires, the ties between Iran and Armenia should be strong, persistent and friendly,” the Leader told Pashinyan on February 28.

Highlighting the friendly relations of Iran and Armenia throughout history, Ayatollah Khamenei said, “Iran and Armenia have never had any problems with each other. According to our Islamic teachings, we deem ourselves obliged to behave well toward our neighboring countries; even though the US officials, such as John Bolton, have no understanding of such matters or of human relations.”