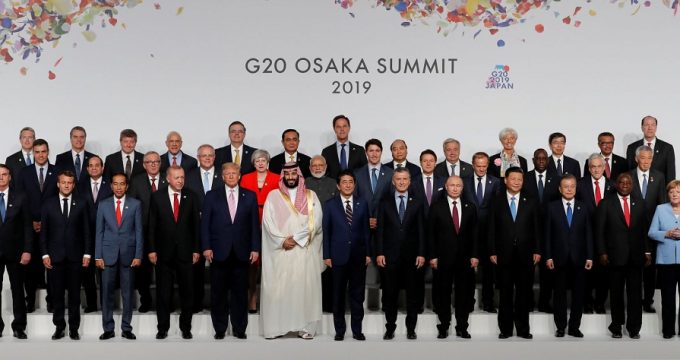 Why was G20 summit unsuccessful?

Alwaght – Fourteenth summit of the Group of 20, or G20, opened on Thursday in the Japanese city of Osaka. The gathering is one of the world’s most important annual summits discussing international economy and politics. Usually, the summit is overshadowed with differences among the members’ leaders over a set of issues. After Donald Trump’s assumption of the power in the US, the differences even became more intensive, transforming into tensions and even hostility among the member states.

As in other areas, Trump at the summit challenged the established traditions governing the world community, making it more like a theater exhibiting the tension between the key players than a meeting at which the leaders help solve various global issues. A set of areas are marking the US tensions with other sides and indicate the failure of this year’s meeting to discuss the main challenges the world is grappling with at the time being.

The main area where tensions are still on the rise is trade. The trade war between the world’s economic heavyweights has been moving ahead fast since Trump became president of the US in 2017. The US president, arguing that he wants to bridge the gap of the US trade with the major partners, started a commercial fight against nearly all of the powerful economies. The major opponent Trump took on was China. He, for instance, imposed tariffs on the Chinese products imported to the US, a measure drew reciprocal response from Beijing. The trade war between Washington and Beijing has been the main issue affecting the world economy since 2017. The case is so important that even the meeting of Trump with Chinese President Xi Jinping can be deemed the most significant event of this year’s G20 summit.

Trump-launched trade war against China and other parties, which has been the main issue over the past year, left destructive impacts on the global economy. According to the figures, the world economic growth fell to 3.2 percent this year from 3.5 percent in the year before. The issue is so weighty that in the closing statement of the meeting the main matter was an invitation to de-escalate the trade and geopolitical tensions. The solution, the statement red, was continued support to the economic activities of the member states’ central banks beside keeping the contacts between the strong economies.

Despite efforts put into the work to solve the economic discords, the level of the trade competition and tensions is so high that there will be no positive outlook to see an end to the commercial escalation in the short run.

The US incompliant on environment and migration

At the summit, there was 1 against 19. Like at the previous summit in Buenos Aires, 19 states highlighted their resolve to save the Paris climate agreement, signed in 2016. Before the meeting, one main issue of discussion at the summit was declared to be the pollution of the seas and the ways to face it. The German Chancellor Angela Merkel delivered a speech on the issue. What was clear during her speech was that all of the G20 members except the US sought protection of the environment. Trump, however, proved to be deeply divided on the case with the world leaders.

Additionally, driven by a racist approach to the migration and migrants, Trump opposed raising the migration issue in the final statement. This displays a hilarious polarity of the world vs. the US, or Trump, on the migration which has now turned into a crucial case of debate worldwide. Trump’s opposition to the entrenched global traditions on many matters including migration is one of many reasons to conclude that the G20 summit of this war was hardly successful.

The political and security difference among the group’s members can be certainly labeled the most unprecedented in nearly two decades. On the one hand, the US is in a conflict of views on a set of cases like Iran, North Korea, and Palestine with the other actors. Washington’s foreign policy now has grown very aggressive compared to the previous administrations. For example, the White House takes the other countries’ relations and deals with Russia as a pretext to develop hostility against them. Trump and his team brazenly warn Turkey and India over buying S-400 air defenses, telling them he will punish them if they move ahead with the deals.

On the other hand, some of the members are at loggerheads with the US over security and political cases. For example, the Turkish President Recep Tayyip Erdogan raised the case of Jamal Khashoggi, the prominent Saudi journalist who was murdered by a hit squad at his country’s consulate in Istanbul on October 2 last year. The fingers of blame were pointed at the Saudi Crown Prince Mohammed bin Salman to whose home and foreign policy Khashoggi was a vocal critic. Erdogan once again called on Riyadh leaders to identify who killed Khashoggi and bring them to justice. That was when Mohammed bin Salman was at the summit. The Turkish leader sought to restore the pressures on the Saudi prince as he has recently begun to recover from the effects of the scandal that hit him hard, despite a Western media propaganda to label him the man of reforms and the face of future Saudi Arabia.

With regard to sources of rifts inside the body of the G20, this year’s summit should be regarded as far from fruitful, like the 2018 Buenos Aires summit, having no influence to pacify the raging global tensions even in a maximum level. After all, the summit was a setting of Trump wrestling with other states on trade and other issues rather than a mechanism allowing for presenting a roadmap to settle the key global challenges.