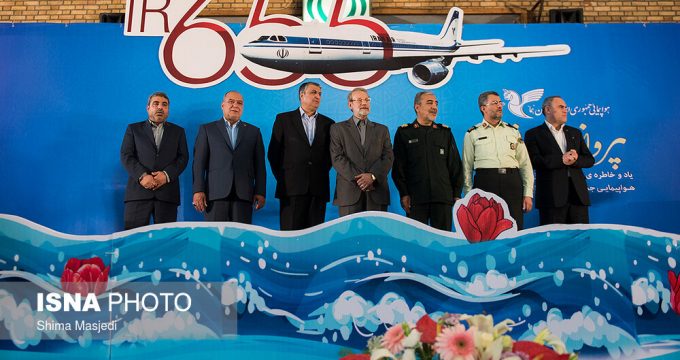 Iran marks 31st anniv. of US downing of passenger plane

MNA – Iran is commemorating the 31st anniversary of the downing of an Iranian Airbus A300B2 passenger plane by a US Navy guided-missile cruiser in the Persian Gulf waters in 1988.

The commemoration ceremony marking the downing of an Iranian Airbus A300B2 passenger plane by a US Navy guided-missile cruiser took place on Tuesday ahead of the incident’s 31st anniversary at Mehrabad Airport in Tehran.

The Iran Air Flight 655 was an Airbus A300B2 civilian aircraft flying in Iranian airspace over the Strait of Hormuz from the port city of Bandar Abbas to Dubai, carrying 274 passengers and 16 crew members on July 3, 1988, when a US Navy guided-missile cruiser, USS Vincennes, fired missiles at it, killing all the 290 onboard.

US officials claimed the warship had mistaken the passenger plane for a warplane, even though the warship was equipped with highly advanced radar systems and electronic battle gear at the time of the attack.

US did not admit legal liability or formally apologize to Iran. In fact, a year later, the captain of the USS Vincennes, William C. Rogers, was cleared of any wrongdoing in the incident, and was even awarded America’s Legion of Merit medal by then President George Bush for his “outstanding service.”

The US behavior towards the Iranians and other nations shows the country has been committing inhumane acts to achieve its “ominous objectives” and using human rights as a pretext to pursue its “excessive demands and illegitimate interests,” Iranian Foreign Ministry had said in a statement on the 30th anniversary of the incident.