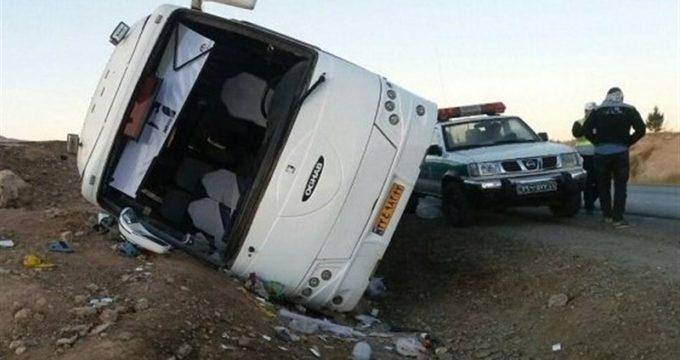 During the first three days of summer, 64 people were killed in traffic related accidents, while 1,375 others got injured, he added.

He went on to note that 2,368 drivers were responsible for the crashes occurred in the aforementioned period.

Given that 91 percent of the country’s total transportation is carried out on roads, there must be special attention to the infrastructure of the roads nationwide, he noted.

Approximately, 22,270,187 vehicles are running in the country and the number of motorcycles reach over 11 million, he said, adding that some 41 million of Iranians currently have driving license.

He further explained that during the two first months of this year, 2,584 people have lost their lives due to road accidents, which means that some 25 people got killed immediately at the crash scene each day, while the number increases to 41 people with taking into account the deaths happening on the way to hospitals.

About 9 of the road accident fatalities have been children who play no role in the accidents and are the victims, he lamented.

Although, road fatalities occurred in suburban areas have dropped by 9 percent during the first two months of this year compared to the same period last year, it increased by 4.6 in urban areas, he regretted.

Analyzing the statistics of the aforementioned period, he pointed out that 54 percent of the deaths happened right in the accident scene, 6 percent while transferring to hospital and 39 percent occurred in medical centers.

Referring to rollovers having a higher fatality rate than other types of vehicle collisions, he said that overturned car accidents are responsible for road fatalities by an average of 24-25 percent, adding, it increased by 40 percent over the Eid al-Fitr vacation (June 4-5) on the southern roads of the country.

He also added that not paying attention to the front road, driving an unsafe speed, overtaking and reckless driving are among the leading causes of such incidents.

Cars are to blame for 57 percent of the accidents, while motorcycles are responsible for 27 percent, and 7.3 and 4.4 percent of which are caused by pickup truck and trucks, respectively, he concluded.

Every year the lives of approximately 1.35 million people worldwide are cut short as a result of a road traffic crash, WHO reports. Between 20 and 50 million more people suffer non-fatal injuries, with many incurring a disability as a result of their injury.

Road traffic injuries cause considerable economic losses to individuals, their families, and to nations as a whole. These losses arise from the cost of treatment as well as lost productivity for those killed or disabled by their injuries, and for family members who need to take time off work or school to care for the injured. Road traffic crashes cost most countries 3% of their gross domestic product.

WHO highlights that road traffic injuries can be prevented. Governments need to take action to address road safety in a holistic manner. This requires involvement from multiple sectors such as transport, police, health, education, and actions that address the safety of roads, vehicles, and road users.