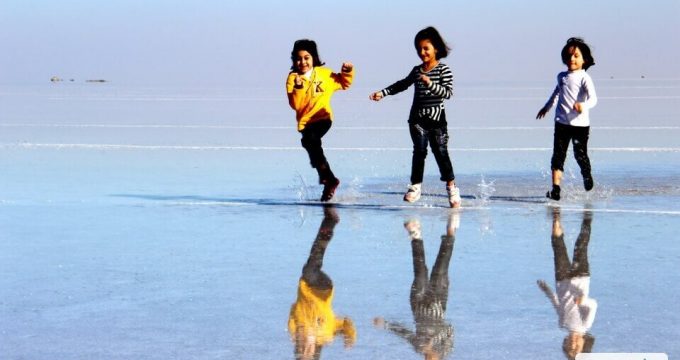 Tehran Times – Salt lakes sometimes appear like giant expanses of mirror, making it hard to differentiate between the sky and the ground. Hoz-e Sultan, a lonely salt lake in the heart of Iran, is one of those.

Covering 37,075 hectares, the lake gives its visitors the impression of a gigantic natural mirror on earth. The light is reflected through dense layers minerals and salt deposits beneath.

With an altitude of about 720 meters above the sea level, the lake is said to be one of the lowest parts of the Iranian plateau. The lake assumes different characteristics, sizes and shapes in various seasons of the year so that its attractiveness varies from time to time.

Situated some 40 kilometers northward of Qom, the lake is adjacent to the Qom – Tehran highway. The lake is also an epicenter of a relatively rich fauna. Locals say, it is a suitable place for breeding a kind of shrimp, called Artemia.

Shour, Ghara-Chai and Varamin are amongst rivers that discharge into the lake. The latter come from southern parts of Tehran Province. Melting snows and some seasonal rainfalls contribute to the inputs as well.

The region is a haven for some breeds of migratory birds, a majority of them come from the north Caspian countries. There can be found footprints of houbara, pigeon, grey goose, mallard, duck, ruddy shelduck, stork, flamingo, falconers, grey goose, stork and different kinds of eagles.

Hoz-e Sultan and its surroundings were used to be a natural habitat for mammals like rabbit, rat, fox and deer, which may still be spotted in the region.

Best time to tour the lake starts from early spring to late autumn.