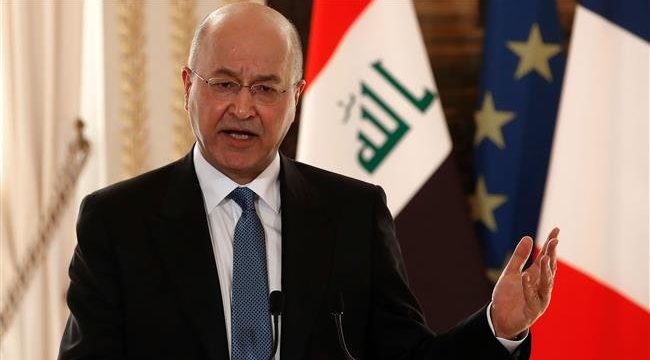 Iraq not to let US use its territory to attack Iran: Iraqi president

MNA – Baghdad will not allow Washington to use its military bases to launch an attack on Iran, the Iraqi country’s president stressed, thrashing US President Donald Trump’s warmongering policies towards the Islamic Republic.

“We do not want our territory to be a staging post for any hostile action against any of our neighbors, including Iran,” Barham Salih told CNN on Tuesday, noting that there is no agreement between Baghdad and Washington that could make Donald Trump think he can use it as such.

Salih recalled the bitter experience of the American invasion of his country, reminding Washington that it is quick to start a war without thinking of potential consequences.

“It’s easy to start a war, but very, very difficult to end a war,” he said.

Tensions have been running high between Iran and the US after Trump unilaterally withdrew from Iran nuclear deal last year on May 8 and re-imposed its secondary sanctions, which have proven to be ineffective to bring Iran back to the negotiating table to renegotiate a new deal.

In February, Trump said that around 5,000 soldiers should remain in Iraq to keep a close “watch” on Iran.

While at the time, Trump said he would not use Iraq as a springboard to strike Iran; however, the growing US vendetta against the Islamic Republic could see all American assets in the region drawn into the confrontation, should large-scale conflict erupt.

The situation between the two sides has been deteriorated in recent weeks, with the US stepping up its unrelenting destabilizing activities in the Middle East and the Persian Gulf region.

A US Global Hawk spy drone violated the Iranian airspace near the Strait of Hormuz on Thursday, which was then shot down by IRGC’s missile defense system. The aircraft had ignored the Corps’ repeated warnings.

Some media on Friday reported that the US president had personally warned Tehran about an incoming attack, in retaliation, which Trump later claimed to have called off at the last minute.

However, Iran has made it very clear that any territorial aggression would be fiercely confronted. At the same time, Tehran has made peaceful overtures to the regional states in the hope of signing comprehensive non-aggression pacts.