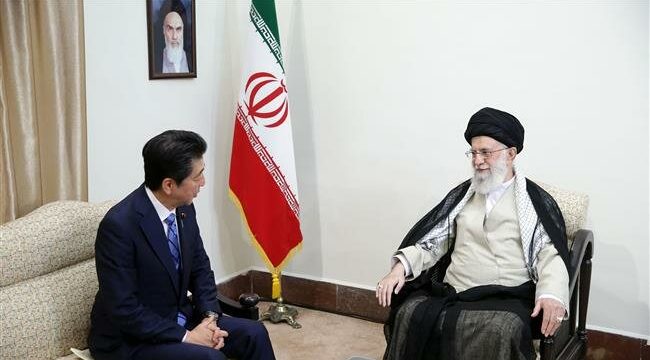 How Khamenei made Abe’s Iran visit a mission impossible

Al-Monitor | Saeid Jafari:  Japanese Prime Minister Shinzo Abe arrived in Tehran June 12 for a two-day state visit that was widely seen as a mission to alleviate tensions between Iran and the United States. Little came out of Abe’s meeting with Iran’s President Hassan Rouhani, and their joint presser offered nothing beyond typical diplomatic exchanges. Between the lines, however, it could be read that Abe had embarked upon a tough journey in trying to bring Iran and the United States closer together.

The day after, Japan’s premier sat down with Supreme Leader Ayatollah Ali Khamenei. Details of talks between Khamenei and visiting world leaders are exclusively covered by his office’s special media team, who most often release an edited text-only version of his remarks. In the case of Abe, nevertheless, the office released video excerpts of his comments in a rare media gesture that had a clear purpose.

“I have no reply for Trump, because I don’t think he deserves any message exchange. I will never give him a reply,” Khamenei was heard saying in the video. Given the Trump administration’s recently tightened measures against Iran, the supreme leader’s reaction was no surprise to those at home, who are holding consensus that dialogue with the current US government would be futile and even detrimental to Iran’s interests. What further seems to have triggered the Iranian leadership’s firm response is the nature of proposals offered by the Japanese mediator. The package Abe delivered did not succeed in luring the Iranians and balancing their attitude toward the US government.