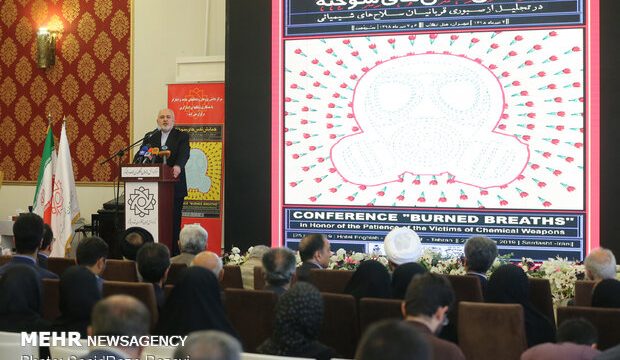 MNA – Foreign Minister Zarif says the US and Israeli regime, with their huge arsenal of chemical and nuclear weapons, have no right to call themselves leading countries in combating weapons of mass destruction.

“It’s been over 14 years since the ratification of the Chemical Weapons Convention, but the US has yet to destroy its chemical weapons arsenal,” Zarif said at a conference marking the anniversary of the 1987 Chemical bombing of Sardasht by former Iraqi dictator Saddam Hussein during the Iraqi-imposed war on Iran. The chemical attack left over 100 people dead and thousands of others severely injured.

“On the other hand, the Zionist regime refuses to join the Convention and destroy its chemical weapons. And this is besides the regime’s nuclear arsenal,” said Zarif, voicing derision at the fact that it is the US and Israel with the most claim on combating weapons of mass destruction.

“We believe that such weapons better suit the likes of those who are willing to kill not 150, but millions of people in nuclear attacks,” Zarif said, in reference to US President Donald Trump, who said he had called off strikes against Iran planned in response to the shooting down of a US drone, saying he had been told 150 Iranians would be killed.

“You’re talking about 150 people? Are you concerned for the life of 150 people? How many people have you killed with chemical weapons, and how many generations have you ruined by your nuclear weapons?”

Zarif went on to add, “we are the leading country in combating weapons of mass destruction, as our religion and defense strategy dictate. We will never seek nuclear weapons because we consider them as undermining security and humane values. We will make efforts to bring to justice those who had used chemical weapons.”