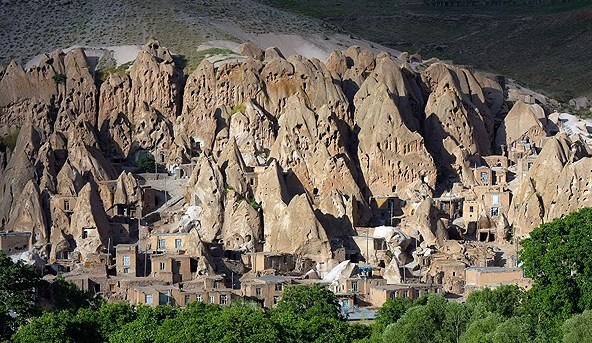 MNA – Kandovan is a historical village in Iran’s East Azarbaijan province, near the city of Tabriz. It is one of the three rocky villages in the world and the beauties of this village have made it one of the strangest villages in Iran.

Kandovan Village is located 60 kilometers southwest of Tabriz in Sahand Rural District, in the Central District of Osku County, East Azerbaijan Province, Iran. It is popular for its magnificent rocky architecture which is the result of volcanic activities and hand-carved structures. The village was registered in Iran’s National Heritage, and it has a worldwide reputation and is the only rocky village in the world which is still inhabited. There are two other cliff villages which are not inhabited with similar structures in the world; Cappadocia in Turkey and Dakota in America.

It’s known as Kandovan because the rocky houses in this village look like hives. (Also Kand means village in Turkish)

It has been said in the history of Kandovan that the first group to settle in the region were residents of a village called Hilevar, 2 km away from Kandovan. They migrated to this area escaping from Mongols and started to carve the Karans to build themselves a safe refuge.

The history of this wonderful village gets backs to 6000 years ago. Some researches of archeology have estimated its age up to 7000 years old.

Village architecture is one of its wonders. Kandovan is a rocky village and the thickness of walls is very thin and about 2 meters. The rock acts as an energy efficient material, keeping the house cool during summer and warm during winter. The heights of these rocks are about 40 meters.

There are sharp pyramidal cliffs with the holes on their irregular surfaces in this village which have been created due to volcano eruption in the region of the Sahand Mountain Range. The cliffs have shaped hive cells which are also known as Karan. Generally, Most of these Karans has two floors and in some cases, three and even four floors that they are not related to each other from the inside.

The inhabitants carved every room of the cliff houses like kitchens, halls, and even pens out of stone to make windows for the rooms and later, to decorate them with colorful glasses.

Since the Kandovan is located on the slopes of the Sahand Mountains, it has a great climate and there are plenty of greenery and landscapes around it. The fruitful plains of the region provide nomads with a possibility to breed honey bees and grow medicinal herbs, both sources of income for the locals. The people of this village are more farmers and ranchers.

It is the only rocky village in the world which is still inhabited and currently, 117 families live in the village. The village has a mosque, public bath, school, a mill, souvenir shops, buffet and restaurant.

The most famous souvenir of Kandovan is Honey. Apricots and sour cherries, dried fruit, rugs and jajim are other souvenirs of Kandovan.

Mineral water springs of Kandovan are also well-known and basically used for treatment of kidney disease.

The best season to visit Kandovan is spring and summer. It is not a favorite destination in autumn and winters since it gets so cold. The minimum temperature of Kandovan is 13° C and the maximum 25° C in summer. Visiting this village will take 2 hours up to one day.