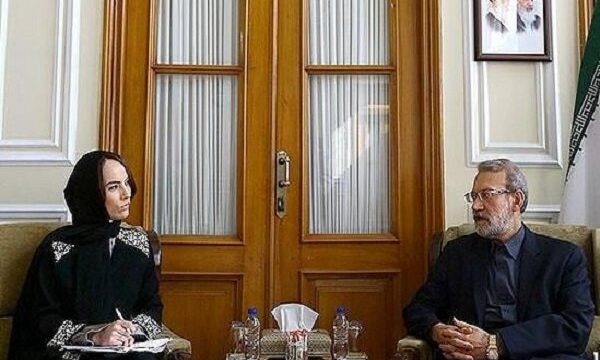 Larijani condemns US, its allies support for terrorism

MNA – The Speaker of the Iranian Parliament Ali Larijani condemned the US and its allies’ support for terrorist groups in a Sun. meeting with the IPU president.

The Speaker of the Iranian Parliament Ali Larijani met with the President of the Inter-Parliamentarian Union (IPU) Gabriela Cuevas Barron in Tehran on Sunday.

During the meeting, Larijani said that the Americans occupy countries in the region and belittle those countries with their behavior, which prepares the social ground for terrorism.

The Iranian parliament speaker also said that the US attacked Afghanistan under the excuse of fighting drug trafficking in 2001 while the opium cultivation has increased by more than 50 times now.

The top Iranian legislator further criticized the western media for their insincere coverage of Yemen and Syria’s developments.

Larijani later referred to the US peace plan for Palestine or the so-called ‘Deal of the Century’, saying that trading the dignity of the Palestinian nation with money is a ‘fiasco’ and would strengthen the Palestinian resistance groups.

He also touched upon the US actions in the world that create chaos in the international system, calling on IPU to address the issue as an international body.

The top Iranian legislator went on to point to the US anti-Iran sanctions and its attempts to create an anti-Iran coalition in the region, noting that the US attempts to bring the Iranian oil sales to zero and other attempts have all ended in failure.

The IPU president, for her part, presented a report on the activities during the one and half year of her presidency over the international body, stressing that if the 46,000 lawmakers across the world, who are connected to the IPU, act coordinately, they can be more effective.

Barron also said that the IPU is looking for confidence-building, adding that massive bureaucracy sometimes creates hurdles on the way of IPU activities.

She went on to say that transparency is the biggest challenge, adding, “lawmakers must be aware of the activities of the Union and help us to achieve our goals.”

Barron also touched upon the role of Iran in the area of multilateralism, adding that Iran can play an effective role in the union with its vast experience in different IPU committees.

The fight against terrorism should not be politicized, the IPU president highlighted, adding and Iran’s experience in this regard is valuable.

Barron also said that the Union should take issues such as Palestine more seriously.

On the Yemen issue, she acknowledged that “we did not do much in the Yemeni issue, and unfortunately there are barriers, and resorting to violence in the world has increased, and the capacity of the international bodies should be used more.”

“We must use and the capacity of the Islamic Republic of Iran in regional issues, especially in Yemen and Syria issues,” Barron further said, adding “Iran always seeks multilateralism, and we welcome that.”