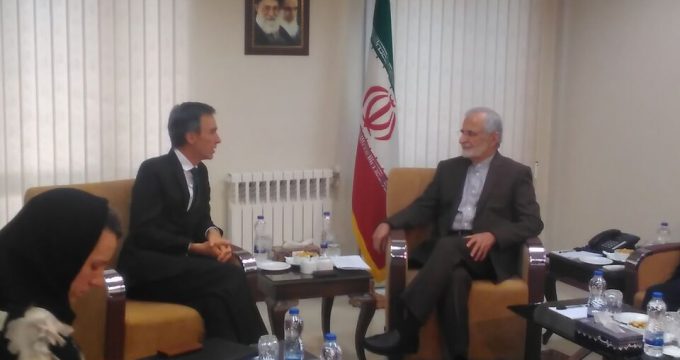 IRNA – Visiting UK Deputy Secretary of Foreign and Commonwealth Office, Andrew Morrison in a meeting with President of Iran’s Strategic Council Kamal Kharrazi on Sunday reviewed regional issues and the tensions in the Middle East.

The meeting was held in presence of the UK Ambassador to Tehran Rob Macaire.

Earlier, speaking to Radio BBC, Former UK Ambassador to Tehran Richard Dalton said Morrison’s visit is aimed at conveying an important message about putting into operation of the Instrument in Support of Trade Exchanges (INSTEX).

INSTEX has been registered at the address of France’s Economy and Finance Ministry in Paris. German banker Per Fischer has been appointed for six months long to run it.

Earlier, the European External Action Service (EEAS) said in a statement on Monday that the visit to Iran of EEAS Secretary General Helga Schmid is a token of the EU support for the Joint Comprehensive Plan of Action.

“Secretary General Schmid also used this opportunity to reiterate the EU’s continued commitment to the JCPOA which is key to increasing stability and security in the Middle East and a crucial element of the global Non-Proliferation Treaty,” the statement said.

It added: “JCPOA has been working and delivering on its primary goal which is to ensure that Iran does not acquire material or equipment to develop a nuclear weapon.”