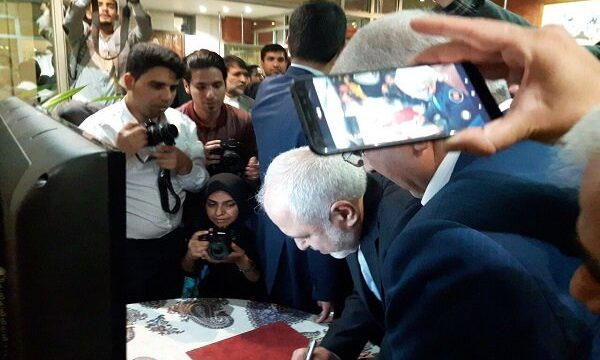 A country with rich history of culture, civilization cannot be threatened

MNA – Iranian Foreign Minister Mohammad Javad Zarif said that a country with an outstanding history of culture and civilization can never be threatened and this is the strategic advantage of tourism which has many cultural and economic benefits.

He made the remarks on the unveiling ceremony of a number of gifts, received from leader and heads of state, held at the venue of Isfahan Central Library on Thu.

“Tourism leads to the vicinity and familiarity of cultures with one another. Iran’s historical depth is completely observed in the cities like Isfahan,” he added.

Tourism will show the historical depth of Iran to foreign tourists, Zarif reiterated.

Today, a number of gifts, which senior officials of countries offer to each other in bilateral meetings, were unveiled, he said, adding, “these gifts will be transferred to the Museum of the Ministry of Foreign Affairs.”

He pointed to the outstanding status of the historic city of Isfahan and added, “Isfahan is a city that is the manifestation of Iranian culture and civilization and also a hub of tourism. In addition to its economic benefit, Isfahan city has strategic advantages.”

In response to a question on the presence of foreign tourists without stamping their passport, he added, “it is for a long time that Iranian Ministry of Foreign Affairs issues electronic visas that are not registered in passports and this issue is customary in most countries in the world.”

In this prestigious ceremony, a number of 60 pieces of artworks of 50 countries, that had been offered to Iranian Foreign Minister Mohammad Javad Zarif during his foreign trips, were unveiled.