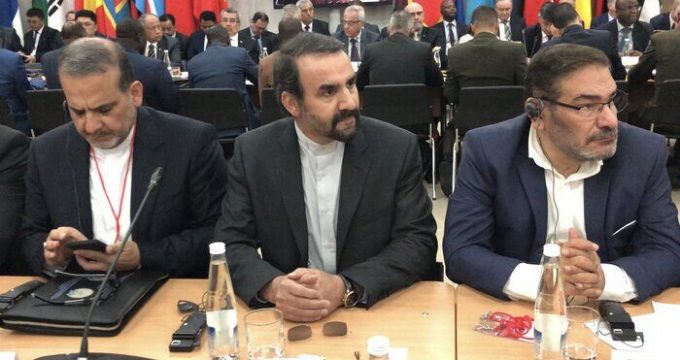 IRNA– The new terrorist policies of the US have been targeting the national sovereignty and identity of the countries, Iran’s Secretary of Supreme National Security Council Ali Shamkhani said at the Global Security Forum in Ufa, Russia on Tuesday.

“Today, the nature, the form and the technique of security threats have changed and unfortunately novel and hybrid threats are rapidly developing,” said Shamkhani.

Shamkhani said that security and economic sustainable development are two interconnected concepts, adding, “Various new threats have passed the land, air, and sea domains and that one malware can work like an atomic bomb.”

Referring to the US and the Zionist regime’s attacking Iranian nuclear facilities with Stuxnet, he said, “Global silence or weak reactions to that cyberattack made the US bold enough to attack Venezuelan power facilities.

He said that US President Donald Trump administration is the most belligerent in the country’s history, adding, “Unfortunately, the bellicose have new conventional and unconventional weapons at hand.”

“The US Department of the Treasury has turned into the department of war. No name suits this behavior of the US but economic terrorism.”

He added that the independent countries should fight this “wild monster” to make a multilateral mechanism.

Referring to the systemic violation of the international law by the US, he said, “The US recognized a part of the Iranian military as a terror group while it has a clear record of fighting terrorism and that the US military and intelligence have been the biggest supporter of terror groups.”

Saying that the US pullout of the Joint Comprehensive Plan of Action and Europe’s passive reaction will pave the way for pushing diplomacy out of the methods of solving security challenges, Shamkhani said that Iran gave a year-long chance to diplomacy to do the commitments and reduced its commitments in the framework of the agreement.

“We are glad that the wise and logical move of Iran was understandable for most countries.”

For countering the US hybrid threats, he also offered some suggestions, including joint attempts to liberate the world economy from US dollar monopoly, standing against the US bullying and interference, not recognizing US extraterritorial sanctions, and helping the countries that may be in danger of the US new security threats.

He hoped that the Forum will lead to a better understanding for restoring peace in the world.