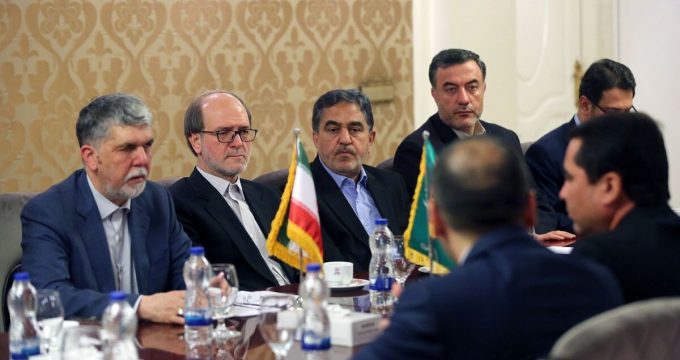 Culture to be “highway” for Iran-Turkmenistan ties

IRNA – Cultural common ground and neighborhood help Iran and Turkmenistan develop their amicable relations, Minister of Culture and the Islamic Guidance Abbas Salehi said in a meeting with his Turkmen counterpart Atagely Shamuradov on Monday.

“According to the Supreme Leader, Iran and Turkmenistan are relatives; we have lived next to each other for a long time,” said Salehi.

Sahehi said that the political relations between the Tehran and Ashgabat are very good, and after President Rouhani’s visit to Turkmenistan, good chances have been provided for the friendly relations of the two countries.

“I’m very glad that we are holding cultural week of Turkmenistan in Iran; such cultural events will strengthen the ties.”

Expressing happiness over the fact that there are good cultural infrastructures, he added that Iran and Turkmenistan signed agreements, based on which and the viewpoint of the Turkmen president, good conditions have been formed for cultural activities.

He also said that in the recent floods that happened in Iran, Turkmenistan showed that it has close relations with Iran.

“There are some big cultural figures that are important for both countries and commemoration ceremony must be held and their literary works must be translated.”

Referring to the history of movie making and long music history in Iran, he reiterated that culture can be a highway for the relations of Iran and Turkmenistan.

Thanking Iran for warm hospitality, Shamuradov, the minister of culture of Turkmenistan, said that the ties between the two countries date back centuries ago.

“We are interested in deepening the relations and aim at using Iran more in the fields of libraries, documents, theater, cinema, and television and use Iranian professors and artists in Turkmenistan.”

He invited Iranian national music bands to perform in his country and Iranian filmmakers to jointly make movies with Turkmen ones.

A book of Mahmoud Farshchian, the world-renowned Iranian miniaturist, was given to Shamuradov as a gift.