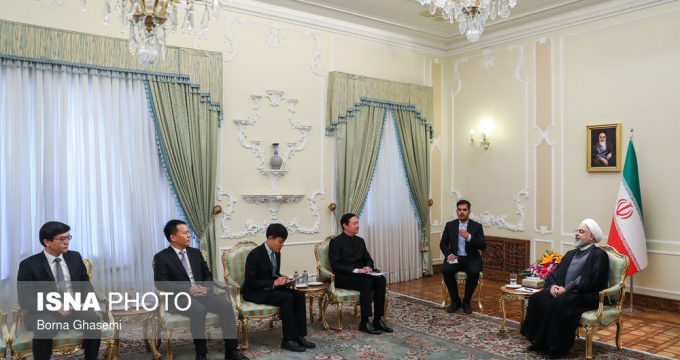 He made the remarks on Monday in a meeting with the new Ambassador of China to Tehran, Chang Hua, while receiving his letter of credence.

“Tehran-Beijing cooperation is not limited to any single field, and Iran is ready to develop relations with China in all fields of mutual interest,” Rouhani said, adding that the two sides also share close views on regional and international issues.

The president stressed that “preserving independence” is very important for both countries, saying, “both countries are opposed to unilateralism, and it is a wrong and dangerous path for the region and the international community.”

Rouhani then referred to the high volume of investment and cooperation between Iran and China in different fields, especially energy, transportation, railways and industrial parks.

The Iranian president described the “Belt and Road Initiative” as very important to Iran, saying “We welcome China’s further cooperation and investment in our southern ports and transportation sector.”

The Islamic Republic of Iran favors the preservation of the 2015 nuclear deal (JCPOA), Rouhani said, adding, “China’s role in this regard is very important and Beijing can contribute enormously to the parties’ commitment to the agreement.”

“Iran and China can also expand cooperation on eradication of terrorism in the Middle East region and Asia,” said the President.

For his part, the new Chinese Ambassador, Chang Hua, said his country is seeking ways to develop its strategic relations with Iran.

“China’s policy is to further develop relations between the two countries in cultural, commercial, energy and transportation fields,” he said.