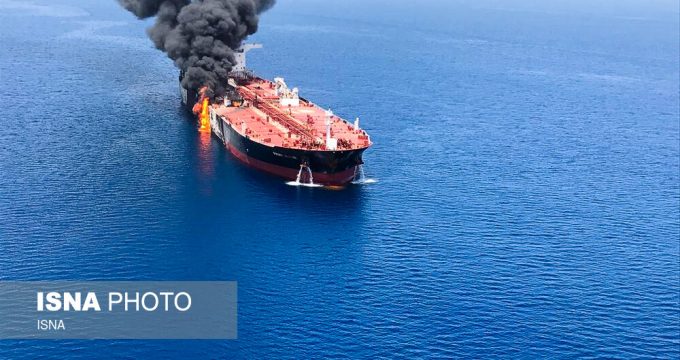 Sputnik | Ekaterina Blinova: A second mysterious attack on oil tankers in the Gulf of Oman has escalated already simmering tensions in the Middle East and marred Japanese Prime Minister Shinzo Abe’s talks in Tehran. Mark Sleboda, a security analyst and former nuclear reactor operator in the US Navy, has suggested that US military forces were likely involved in the incident.

The Gulf of Oman incident, hastily blamed on Iran by the US, has added to the simmering tensions between Tehran and Washington. Speaking to Fox News on 14 June, Donald Trump insisted that Iran “did do it”, prompting a tough response from Tehran that accused the US of resorting to “sabotage” diplomacy and jumping to allegations “without a shred of factual or circumstantial evidence”.

​Meanwhile, Washington’s version of what happened in the Gulf of Oman began to burst at the seams as Kokuka President Yutaka Katada said that his ship was attacked by “flying objects”, not “mines”, as the US claimed.

On 13 June 2019, two oil tankers, the Japanese Kokuka Courageous and Norwegian Front Altair, were attacked while transiting the Gulf of Oman on their way southeast in international waters. The incident took place a month after a strikingly similar episode in May, when four commercial ships were struck off Fujairah’s coast in the Gulf of Oman.

Mark Sleboda, an international affairs and security analyst and former nuclear reactor operator in the US Navy, finds it highly unlikely that Iran could have attacked a Japanese vessel amid the high-level talks between Japanese Prime Minister Shinzo Abe and Ayatollah Khamenei, sharing his view on who could really benefit from the attack.

Sputnik: The US rushed to pin the blame for the Gulf of Oman incident, when two oil tankers were hit by explosions, on Iran. To back its claims, the US Central Command released a video that allegedly shows Iran’s Islamic Revolutionary Guard Corps (IRGC) approaching one of the tankers hit by an explosion to remove an unexploded limpet mine. Immediately after the incident, a US Navy destroyer was sent to the region. What do you think about the US forces’ prompt reaction to the incident?

Mark Sleboda: The US already has significant military assets in the Persian Gulf theatre of operations. Two US guided missile destroyers, the USS Mason (DDG-87) and USS Bainbridge (DDG-96), are currently right in the Gulf of Oman where the incident occurred and very near Iranian territorial waters. They both belong to the nearby USS Abraham Lincoln carrier strike group that was recently sent to the Persian Gulf, which the Gulf of Oman flows into.

We know that the US has reconaissance and spy aircraft flying directly over the area as well as combat-capable drones, with CNN even sketchily reporting that a US MQ-9 Reaper drone supposedly came under attack by a missile launched from Iranian naval vessels in the hours before the incident, at least according to the usual anonymous “US official”, but without word of whether this alleged attack took place in international or Iranian territorial waters. The US has also recently deployed B-52 nuclear-capable bombers and another 1,500 US troops to the Persian Gulf theatre in a sabre rattling move guaranteed to increase tensions in the region. And of course the US Fifth Fleet is based right in nearby Bahrain and the US Central Command, responsible for US hegemonic control over the Middle East, has a large forward operating base in Qatar.

It is clear from this that US military forces were already present in the area and likely involved in the incident to at least some degree. The key question, of course, is to what degree.

Sputnik: The Gulf of Oman incident bears a strong resemblance to the reported “sabotage attack” in mid-May, blamed on Iran by the US. What’s behind these strikingly similar episodes? Is it possible that Iran is just delivering on its threat to “close” the Strait of Hormuz for energy trade in case Washington continues its crackdown on Tehran?

Mark Sleboda: The 12 May incident is similar in that it also involved four commercial tankers in the area also suffering from mysterious damage and with the US also immediately placing the blame on Iran without presenting any evidence to support these accusations.

Of course the economic war that the US is waging on Iran, with its ever-tightening noose of illegal and unilateral US sanctions meant to scare off and blackmail all states and corporations from doing business with Iran, is a provocation meant to provoke exactly such a response.

​But I think it unlikely that Iran would act in such a dramatic way at this point, because that noose is not yet firmly on Iran’s economic neck. Iran is still doing business, including oil, gas, and petrochemical sales with a number of states and corporations defying the US sanctions regime. Iran is still negotiating with the EU, who is attempting to find ways to avoid US sanctions and sticking by the JCPOA. Such attacks on Persian Gulf shipping, with 30 percent of the world’s seaborne oil and petrochemical products moving through the Strait of Hormuz, would surely push the EU to abandon Iran and move closer to the US position.

Further, in a historic meeting, the Japanese Prime Minister Shinzo Abe was in Tehran while the attacks took place, negotiating with Ayatollah Khamenei on the possibilities for continuing oil trade despite US sanctions and attempting to reduce tensions.

I find it highly unlikely that the Iranian government would attack two tankers bound for Japan, the Kokuka Courageous is even Japanese-owned, while the Japanese PM himself was in Iran. The other vessel, the Front Altair, was half-crewed by Russian sailors and is owned by the Norwegian company Frontline, a large tanker leasing firm which has been very cooperative and continued to ship Iranian oil despite US sanctions.

For these reasons, even if Iran had decided to launch their “nuclear option” of trying to close the Strait of Hormuz and end all global traffic through the Persian Gulf, I find it extremely unlikely that they would do so at this particular time and starting with these particular targets. It seems much more likely that some state party bent on conflict with Iran was extremely threatened by the possibility that successful Japanese-Iranian diplomacy would provide an economic lifeline for Iran and perhaps even an outbreak of peace. The specific timing and targets suggest motive to shut this down.

​Sputnik: Meanwhile, Yutaka Katada, the president of the Japanese company operating the Kokuka Courageous tanker, refuted the US version of the attack, expressing doubt that a mine had been attached to its hull. He stressed that the ship’s crew saw “two flying objects” ahead of the blast. How could this case be sorted out? Could an independent investigative group look into this case to prevent an escalation?

Mark Sleboda: The obvious solution to the contradictory version of the attack presented by the Trump regime and the Japanese company whose ship was attacked is a truly independent UN investigation, as the Russian government has suggested and called for. The US may already have been caught in another falsehood after US officials claimed that the Front Altair was being prevented from being towed after the attack by Iranian fast-boats, a claim which has been refuted by Frontline company officials who said the tanker is already being towed away.

Certainly the US narrative of this incident, with their long proven historical record of false flag incidents and lying to create pretexts for their aggression as well as the Trump regime’s loudly proclaimed bellicose animosity towards Iran, has to be called into doubt and their accusations require a very high degree of evidence to even be considered credible. They have as yet provided none.

Sputnik: What is the ultimate goal of the Trump administration, in your opinion? Would Trump be able to prevent a potential all-out conflict amid growing tensions between the US and the Islamic Republic of Iran? Could it spin out of control? Who is behind dragging the US into trouble?

Mark Sleboda: I believe the ultimate goal of the Trump administration, or at least the people within it driving foreign and military policy, including National Security Adviser John Bolton and Secretary of State Mike Pompeo, is provoking and initiating an armed conflict with Iran with the eventual goal of regime change.

This would fall right in line with the neocon Brookings Institute policy paper “Which Path to Persia” (2009), which specifically discusses the necessity of and methods for goading Iran into war. It reads like a playbook being followed for Trump regime policy towards Iran today.

Such a direct military conflict would pull in both US and Iranian allies and likely result in large scale conflict all across the Middle East, potentially igniting Palestine, Lebanon and Iraq and renewing current conflicts in Syria and Yemen. Certainly the US allies Saudi Arabia, Israel and the United Arab Emirates all have a very hostile relationship with Iran and are actively pushing and lobbying the Trump regime to taking more aggressive action.

The question is, however, whether such a conflict would really be in the American people’s interests or rather putting Saudi Arabia and Israel first.