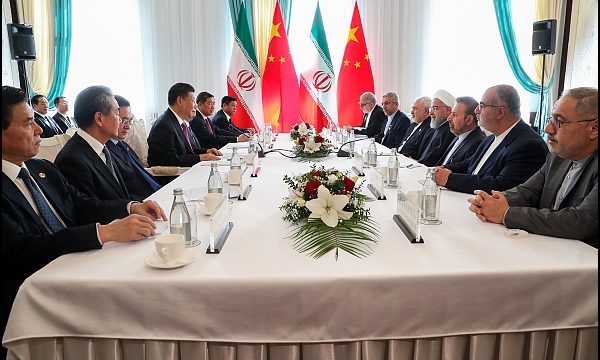 President Xi: China to promote ties with Iran no matter what

He made the remarks on Friday during a meeting with Iranian President Hassan Rouhani on the sidelines of the Shanghai Cooperation Organization summit underway in the Kyrgyz capital of Bishkek, the official Xinhua news agency said.

Xi condemned Washington’s unilateral pullout from the 2015 nuclear deal with Tehran as the main reason behind rising tensions in the region, calling for the promotion of multilateralism.

He stressed that Beijing will continue its strategic relations with Tehran in various fields, including fighting terrorism and systematic crimes.

Rouhani said Iran and China’s resistance in the face of US unilateralism could be in the interest of the two countries as well as the entire world.

He further slammed Washington for violating international laws and unilaterally abandoning agreements, including the Joint Comprehensive Plan of Action (JCPOA).

“The US is violating all international norms, and is seeking to establish its dominance over Asia and the entire world,” the president said.

Iran and China, Rouhani said, have great capacities to develop their relations. “Due to its exceptional geographical location, Iran is ready to play a key role in the development of ‘One Belt, One Road’ Initiative,” he said.

Under the “One Belt, One Road” initiative, China aims to create a modern Silk Road economic belt and a 21st century maritime Silk Road to boost trade.

Projects under the plan include a network of railways, highways, oil and gas pipelines, power grids, Internet networks, maritime and other infrastructure links across Central, West and South Asia to as far as Greece, Russia and Oman.

The Iranian president was about to deliver a speech to the 19th SCO summit and later meet participating leaders, including Russian President Vladimir Putin.

The intergovernmental organization seeks to strengthen mutual trust and good-neighborly ties between the member countries, contribute to regional stability and facilitate cooperation in different sectors, including political, trade, economic and energy issues.