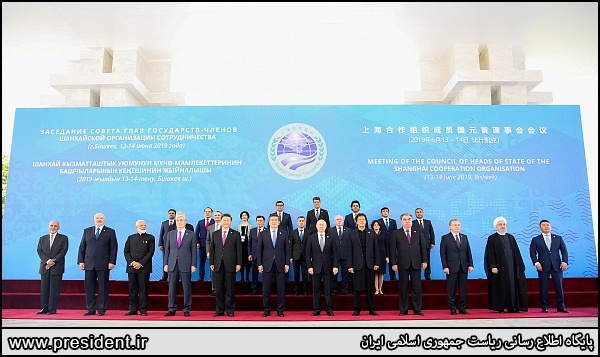 Press TV – The Shanghai Cooperation Organization is an “effective and constructive” mechanism for promoting multilateral cooperation that plays an important role in maintaining regional peace and stability, the SCO member states say.

“It was noted that the SCO had asserted itself as a solid platform for strengthening mutual understanding, trust-based dialogue and equitable partnership in the interests of building international relations of a new type, based on the generally accepted principles and standards of international law, as well as forging a common perception of the concept for creating a community of humankind’s common destiny,” participants at the SCO heads of state council meeting said in a press release in Bishkek on Friday.

They stressed the importance of exchanging views about topical international and regional matters and making further joint efforts to ensure reliable security and sustainable development in the SCO region.

They also called for strengthening mutually beneficial cooperation with all interested states in line with generally accepted standards and principles of international law, above all the United Nations Charter.

“They emphasized the unacceptability of attempts to ensure one country’s security at the expense of other counties’ security and noted that the unilateral and unlimited buildup of missile defense systems by certain countries or groups of states was detrimental to international security and a destabilizing factor in the world,” the statement said.

Addressing the SCO meeting on Friday, Iran’s President Hassan Rouhani said the administration of US President Donald Trump is a serious threat to the stability of the Middle East and the world, urging the international community to stand up to US unilateralism.

“For the past two years, the US government has used its economic, financial and military power through an aggressive approach to disrupt all international structures and regulations,” Rouhani said.

According to the press release, the SCO member states resolutely condemn terrorism in all its forms and manifestations and urge the international community to boost global cooperation in the fight against the scourge under the United Nations’ central role and through the implementation of relevant UN Security Council resolutions and the UN Global Counter-Terrorism Strategy.

They said efforts against terrorism should be in line with the UN Charter and the principles of international law without politicization and double standards while respecting the sovereignty and independence of all states, it added.

The participants called for consensus regarding the adoption of the Comprehensive Convention on International Terrorism.

The organization’s members slammed any act of interference in the domestic affairs of states under the pretext of countering terrorism and extremism and noted the unacceptability of using terrorist, extremist and radical groups for mercenary purposes.

In their press release, the SCO member states stressed the importance of steadily implementing the multilateral nuclear accord, officially known as the Joint Comprehensive Plan of Action (JCPOA), under UN Security Council Resolution 2231 that calls on all the parties to fulfill their obligations unfailingly.

Iran and the five permanent members of the United Nations Security Council — the United States, France, Britain, Russia and China — plus Germany signed the nuclear agreement on July 14, 2015 and started implementing it on January 16, 2016.

However, President Trump pulled his country out of the JCPOA in May 2018 and re-imposed harsh sanctions against the Islamic Republic in defiance of global criticisms.

Elsewhere in the press release, the SCO member states said the ongoing crisis in Syria should be solved only through dialog while ensuring the Arab country’s sovereignty, independence and territorial integrity.

It said, “They emphasized the fact that cooperation within the framework of the Astana format had created the conditions for implementing UN Security Council Resolution 2254,” which endorses a road map for a peace process in Syria, and sets out the outlines of a nationwide ceasefire.

Syria has been gripped by foreign-backed militancy since March 2011. The Syrian government says the Israeli regime and its Western and regional allies have been aiding Takfiri terrorist groups wreaking havoc in the country.

The SCO member states also expressed their determination to promote the body’s international standing and its role in global and regional affairs.

“The creation of a broad, open, mutually beneficial and equitable partnership within the SCO space, based on merging the respective potential of the region’s countries, international organizations and multilateral associations, was identified as a promising objective,” the press release pointed out.

The intergovernmental organization seeks to strengthen mutual trust and good neighborly ties between the member countries, contribute to regional stability and facilitate cooperation in different sectors, including political, trade, economic and energy issues.