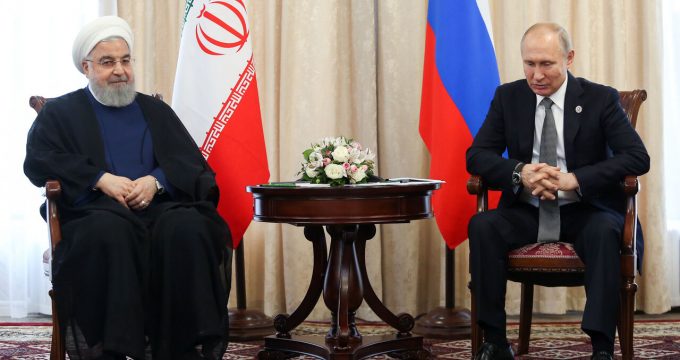 Russian President Vladimir Putin made the remarks in a meeting with Iranian President Hassan Rouhani on the sidelines of 19th Shanghai Cooperation Organization (SCO) Summit in Bishkek, Kyrgyzstan.

Putin referred to Iran’s constructive role in resolution of Syrian crisis and said that the economic relations between Tehran and Moscow are developing in various fields.

The Russian president lauded the success of Iran, Russia and Turkey’s initiative for resolution of crisis in Syria.

He pointed to the two countries’ historical commonalities and noted that the two nations have been always interested in friendly relations throughout history.

President Rouhani was officially welcomed by Kyrgyzstan premier on Thursday when he arrived in Bishkek to attend the 19th SCO Summit.

The 19th SCO Summit was held on June 13-14 with presence of leaders of 11 countries, including Russia, China, Kazakhstan, Tajikistan, Uzbekistan, India, Pakistan and Iran.

SCO is an intergovernmental organization which was founded for multilateral political, economic and security cooperation. China, Russia, Kazakhstan, Kyrgyzstan, Tajikistan, Uzbekistan, Pakistan and India are major members while, Iran, Mongolia, Afghanistan and Belarus serve as observers.

Rouhani will leave Bishkek for Dushanbe on the second leg of his trip to attend the Conference on Interaction and Confidence-Building Measures in Asia (CICA).