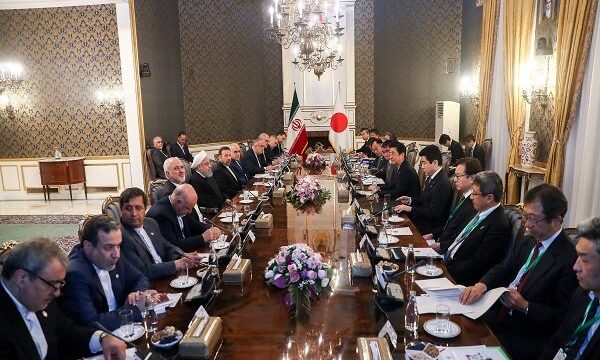 Violating int’l treaties not beneficial for anyone: Rouhani

MNA – In a meeting with high-ranking delegations of Iran and Japan, Iranian President Hassan Rouhani warned that Violating international treaties is not beneficial for every one.

Speaking late on Wednesday at the meeting of high-ranking delegations of Iran and Japan, President Hassan Rouhani said, “The Islamic Republic of Iran is very interested in development of relations with Japan and we hope that this visit becomes a turning point in Tehran-Tokyo relations”.
President welcomed the development and deepening of Tehran-Tokyo relations and stressed that the Islamic Republic of Iran is willing to develop friendly, long-term ties with Japan.

He named dam construction, environment, energy and petrochemicals as the proper sectors for joint cooperation between the two sides.

He also poised Iran’s readiness for Japan’s investments in projects in Chabahar port and Makran region.

Rouhani underlined that all the countries are responsible towards JCPOA and UN 2231 Resolution, hoping that Japan to be meet its commitments.
Iranian President underlined that violation of international treaties will be beneficial to no one.

He also said that Iran is ready to cooperate with Japan to resolve regional issues. If it were not for Iran’s work in fighting terrorism, terrorist groups, including ISIS, would have plunged the entire region into crisis, he said, adding, “Regional security is very important for the Islamic Republic of Iran”.

“Iran is not aimed at having tensions with other countries including the US but if we are threatened our response would be destructive,” he said.

“Today, millions of refugees, including our Afghan brothers and sisters, are living in Iran and hundreds of thousands of students are studying in Iran without any tuition fees,” said the President.

Stating that Iran spends 8 billion dollars a year for housing refugees and fighting drug trafficking, he said, “Continuing this trend could be impossible for us under US’ economic pressures and sanctions”.

He also expressed hope that the Japanese PM’s visit to Tehran brings about a good development in economic, cultural, and scientific and technological cooperation between the two countries.

“There are concerns in the region, the responsibility of which falls on the United States, and this tension began with the economic war of the US against the Iranian nation,” he continued.

Dr Rouhani also went on to say, “In fact, if we are all interested in regional security and ease of tensions, we need to begin from where this instability was spurred, and that is economic sanctions against Iran. If these sanctions end, new type of relations will begin in the region”.

On the matters between Iran and America, he said, “The key to the settlement of the issues is at Washington’s hands and whenever the Americans go beyond just talking and lift illegal sanctions against Iran, conditions will be different”.

“With the measures that the US government has taken towards Iran, the people of Iran are angry and I hope that Americans understand that if having fighting a government or army is possible, war with a nation is definitely doomed to failure,” he continued.

The President of the Islamic Republic of Iran also expressed happiness over Japan supporting the JCPOA, and said, “We do not want the JCPOA to fail, and the decisions made and measures taken are based on Paragraph 36 of the JCPOA”.

“I am very happy that your goal is peace and ease of tensions, and I hope you success in this regard,” continued Rouhani.

At the meeting, Prime Minister of Japan Shinzo Abe said, “As Iran’s friend, Japan is concerned about any kind of tensions in the region”.

Appreciating Iran’s cooperation with IAEA, he said, “Japan supports JCPOA because it helps establish peace and stability in the region”.

“The Islamic Republic of Iran has a very big role in realisation of peace and stability in the region, and is a very important country,” he said.

Shinzo continued, “Survival of the JCPOA is an essential element for trust in international and bilateral relations and Japan will continue its efforts and cooperation for its survival”.

He continued, “We have had serious negotiations with the US for keeping our economic relations with Iran, including importing Iran’s oil, and will continue to do so”.

The Japanese Prime Minister also described easing of tensions as the most important goal of his visit and said, “I strongly hope that my visit to Iran leads to the ease of tensions and establishment of peace and stability in the region”.