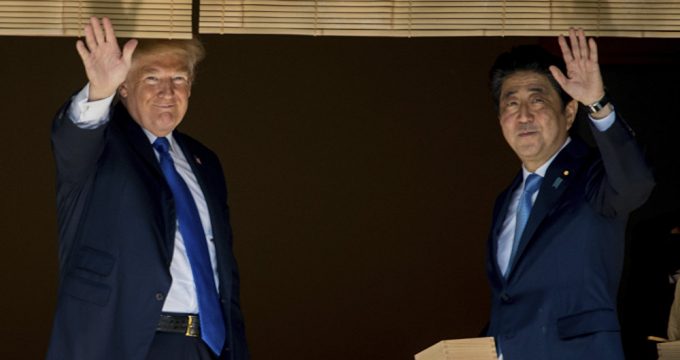 With Trump’s blessing, Japan looks to mend ties with Iran

Bloomberg | Golnar Motevalli  & Isabel Reynolds: Japanese Prime Minister Shinzo Abe, a rare friend of both President Donald Trump and Iran’s leaders, arrived in Tehran on Wednesday with the daunting task of bridging a divide that could plunge the Middle East into renewed chaos.

Abe’s visit comes as the U.S. gives scant indication it’s ready to ease sanctions it reimposed after abandoning a 2015 accord meant to prevent Iran from developing a nuclear bomb. Before he arrived, Iranian Foreign Minister Mohammad Javad Zarif said his country will tell the Japanese leader it expects the U.S. to stop waging an “economic war” against it.

Tehran will also ask Abe to mediate an easing of U.S. oil sanctions that have crippled the Iranian economy, Reuters reported, citing an unidentified official.

With the two sides so far apart, any step that reduces mistrust and hostility would be a welcome achievement for Abe, seen more as a stable hand running the world’s third-largest economy than a globe-trotting peace negotiator. Trump sanctioned the trip, which would be the first by a sitting Japanese prime minister to Iran in 41 years and includes talks with Supreme Leader Ayatollah Ali Khamenei and President Hassan Rouhani.

Why the U.S.-Iran Conflict Is Now Coming to a Head

“What Abe can do depends on what Trump has given Abe,” said Kazuo Takahashi, professor of International Politics at the Open University of Japan, who specializes in Japanese policy toward Iran. “If he is going as a messenger boy, he is shaming himself in front of the world’s public opinion. I don’t think he’d take such a political risk without some ideas of inducement for the Iranians offered by the Americans.”

Abe, who spoke to Trump by telephone just ahead of his trip, told reporters before boarding his plane to Tehran that he plans to have a frank exchange of views with Iran’s leader.

A missile attack on a Saudi Arabian airport by Tehran-backed Yemeni rebels ratcheted up tensions in the Gulf just as Abe’s efforts to avert escalation were about to get underway. The region has been churning since Washington piled more sanctions on Iran in May and unleashed a show of military force, drawing a threat from Iran to retreat from the nuclear deal.

The Japanese leader wades into the fray as the Trump administration appears ready to add new sanctions, this time against the economic lifeline Iran and European leaders created to allow trade to continue with European countries that have remained in the accord.

“I don’t think he will be able to re-start talks between the U.S. and Iran, or get the U.S. to soften its line on sanctions or Iran to accept some of the U.S. demands. It won’t be anything like that,” an energy expert with ties to the Abe government said.

Abe will listen to the Iranian leadership’s requests and convey U.S. thinking to them, which will maintain the dialogue regarding the nuclear agreement, said the expert, who declined to be named because of the sensitivity of the visit.

While Japan has maintained good ties with Iran for decades and called for Tehran to abide by the nuclear deal, its pro-U.S. stance could mean Abe’s offerings are received with caution.

Why the World Is Worried About Iran’s Nuclear Program

For Japan, there is an economic incentive to prevent tensions in the Gulf from spiraling out of control. It relies heavily on Middle Eastern energy, and before the 1979 Islamic Revolution, the bulk of those supplies came from Iran.

But as U.S.-Iran relations deteriorated over the years, Japan significantly reduced crude imports from Iran in favor of supplies from its Gulf rivals Saudi Arabia, the United Arab Emirates and Kuwait — all allies of Washington.

With Saudi Arabia saying last month there were attacks on its oil tankers and Iran threatening to disrupt traffic in the Gulf should Washington succeed in wiping out its oil sales, maintaining stability is of paramount importance to Japan.

Family Affair
The Japanese public isn’t expecting much of the visit, an opinion poll released Tuesday from public broadcaster NHK showed, reducing the political risks for Abe. The visit does increase his global exposure ahead of an upper house election planned for July and Japan hosting the Group of 20 leaders summit in late June.

His father, former Foreign Minister Shintaro Abe, also tried his hand — unsuccessfully — at defusing Middle East tensions with a visit to Iran in 1983. He met then-President Khamenei, who would eventually be promoted to the clerical hierarchy and the mantle of the Supreme Leader.

“Politically, we never had a huge issue with the Iranian government, neither pre- nor post the revolutionary period in Iran. Our economic ties have been stranded, I would say, because of pressure from Washington,” said Koichiro Tanaka, president of the Japanese Institute of Middle East Economies in Tokyo.

— With assistance by Tsuyoshi Inajima, Takashi Hirokawa, and Ladane Nasseri