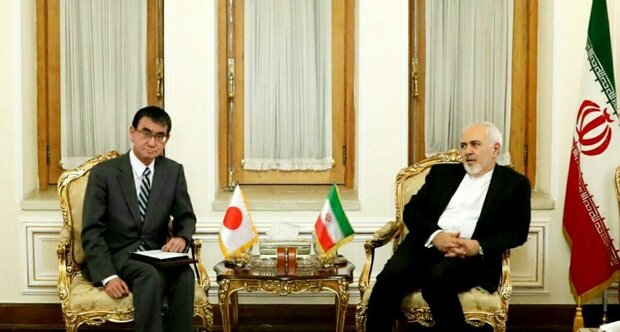 IRNA – Iranian Foreign Minister Mohammad Javad Zarif said on Wednesday that the US is spreading anti-Iran sentiment on a daily basis.

Zarif referred to the historical relations between Iran and Japan, and described the two countries as good friends and partners in various fields of politics, economics and culture.

He made the remarks in a meeting with the Japanese Foreign Minister Tarō Kōno.

In this difficult situation, the Iranian administration will review its financial policies and will amend the budget in order to improve the people’s life without reliance on oil revenues, he said.

In the meantime, the Japanese foreign minister, for his part, described the Japanese Prime Minister Shinzō Abe’s visit to Iran as historic.

The official said that Iran is an important country in the region, noting that escalation of tensions in the region is not at the interest of any country.

The Japanese foreign minister said that Tokyo is ready to do its best to de-escalate tensions in the region.

The trip is to be made within the framework of traditional and longstanding relations and in line with developing bilateral ties and issues of mutual interest.

Abe’s visit to Tehran is the first visit to Iran by a Japanese leader over the past four decades after the victory of the Islamic Revolution.

According to Japanese officials, Abe will not be able to mediate, but his visit is aimed at reducing tensions and helps restore stability in the Middle East.

Iran announced that it would suspend some of its commitments under the deal in reaction to the US hostile measures and would proceed with the trend after a 60-day moratorium it gave to the European Union, Russia, China and Germany, the states parties to the JCPOA.

“There are concerns over rising tensions in the Middle East. While the situation attracts the attention of the international community, for peace and stability in the region, Japan wants to play a role as much as it can,” Abe was quoted as saying while leaving Tokyo for Tehran.

He added: “To ease tensions, I’d like to have a frank exchange of views.”