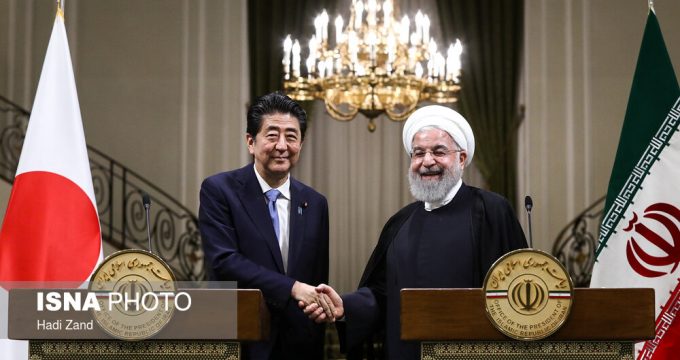 US economic terrorism must end for positive developments to happen

MNA – President Rouhani said in a joint press conference with Japanese Prime Minister Shinzo Abe that the cause of all current tensions in the region is the US’ economic war against the Iranian nation.

At the joint press conference in Tehran on Wednesday evening, President Rouhani expressed his gratitude to Mr Abe for accepting his invitation to visit Iran, saying that the two leaders have had constructive talks over the past years.

Rouhani said that today’s meeting was their eighth meeting.

“We welcome the fact that government of Japan and the prime minister are determined to expand political, economic, and regional and international relations,” Rouhani said.

The president stated that in both private meeting with Japanese prime minister and the meeting attended by the two countries’ delegations the two sides discussed “the issues of bilateral relations including the Japan’s investment Iran’s Chabahar and Makran coastlines.”

“The fact that Japan is interested in buying oil from Iran and in resolving financial issues and scientific and cultural relations is a point that can guarantee the development of bilateral relations,” he added.

He further noted that in addition to bilateral relations the two sides also had discussed security and détente in the region.

“The tensions have roots in the American economic war against the Iranian nation, and if this war is stopped, we will witness positive developments in the region and in the world,” the president said.

Rouhani went on to add that Iran will not start any war, while stressing that it will vigorously respond to any aggression.

He added that the Japanese prime minister had been optimistic about the future in the meetings, expressing his happiness with Abe’s support for the continuation of the JCPOA as important for the region and the world.

Rouhani also said that he had urged the prime minister to start cooperation between Iran and Japan on peaceful nuclear technology.

The Iranian president further expressed hope that the visit of the Japanese prime minister would open a new chapter in the bilateral relations between the two countries.