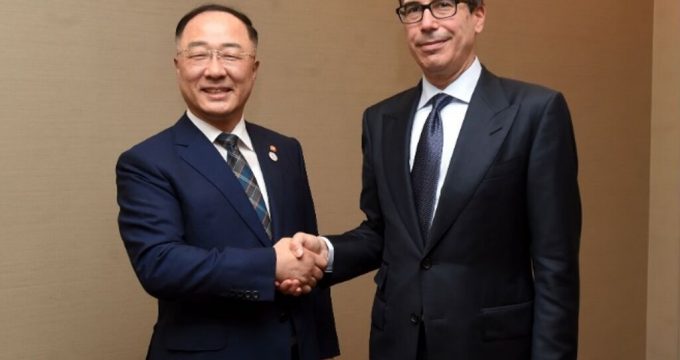 IRNA – The South Korean Economy and Finance Minister Hong Nam-ki in a meeting with his American counterpart called for lifting US sanctions on South Korean firms doing business with Iran.

According to South Korean media, speaking in a meeting with US Secretary of the Treasury Steven Mnuchin which was held on the sidelines of G20 meeting in Japan, Nam-ki urged the US to remove the bottlenecks emanated from unilateral sanctions of Washington against small South Korean enterprises.

Meanwhile, Mnuchin expressed hope for resolving the issue through close talks between Washington and Seoul.

South Korea is one of the eight countries that has been exempted from US oil sanctions and got waivers after re-imposition of sanctions on Iran by US president Donald Trump.

Earlier, Governor of the Central Bank of Iran Abdolnaser Hemmati in a meeting with head of South Korea central bank called on the South Korean officials to take urgent action for regulating banking ties between Tehran and Seoul.

Referring to the negative impact of irregularities in banking ties on two countries’ diplomatic relations, he expressed hope for resolving the problem soon.

The US gave waivers to eight countries including Japan, India and South Korea to keep buying Iranian oil after it reimposed sanctions on the OPEC producer on November 5.

Over the past year and after the US illegal withdrawal from Iran nuclear deal and its breach of the UN Security Council Resolution 2231, the Islamic Republic of Iran has shown most of its self-restraint and has given considerable opportunity on requests made by other parties to JCPOA.