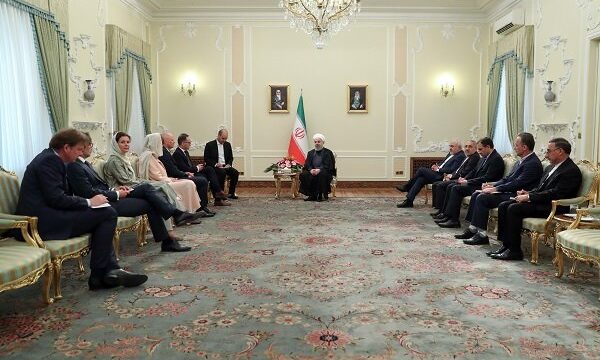 MNA –In a meeting with German foreign minister, Iran’s Rouhani said that the withdrawal of the United States from the Joint Comprehensive Plan of Action (JCPOA) had nothing but negative impacts on interaction among countries and security of the region.

Speaking in a meeting with the Minister of Foreign Affairs of Germany Heiko Maas on Monday evening, President Hassan Rouhani said, “The Islamic Republic of Iran is determined to develop political and economic relations with the European Union member states, especially Germany”.

On the nuclear deal, the President said, “With its unilateral withdrawal from the JCPOA, the United States violated the agreement made between 7 countries, as well as the resolution of the Security Council, beginning terrorist acts in the region, but unfortunately, we have not seen any responsible, proper reaction by Europe towards the US”.

“With its unjust sanctions, the United States is moving in the path of economic terrorism and we believe that we have to stand up to those who deprive people of medicine and food,” he added.

Dr Rouhani also referred to the solemn promises by three European countries in the past one year, saying, “In the past one year, we have not seen any serious acts from the side of Europe despite fairly good political stance; therefore, we have to made decisions and act in a way that is beneficial for us, you and all countries and the region”.

He said, “The war that the US has started against Iran for the past one year will never be beneficial for anybody and the Iranian nation have proved in this time span that they will withstand these pressures and bullying behaviours”.

Iran could act based on Article 36 of the JCPOA after US’ withdrawal, but it waited for a year, said the President, adding, “We expect Europe to stand up to the United States’ economic terrorism against the Iranian nation, living up to its commitments under the deal”.