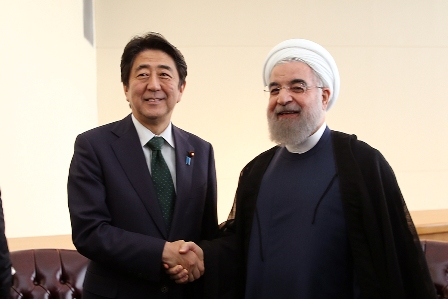 MNA – Professor of international political economy in the University of Chicago believes that Shinzo Abe has sought to become Trump’s primary ally in Asia and if the Prime Minister could facilitate some kind of breakthrough with Iran, it would further cement the relationship between Japan and the US.

Prime Minister Shinzo Abe plans to travel to Iran on June 12, the first visit by a Japanese prime minister in the past four decades as Tokyo hopes to mediate between Washington and Tehran. Tensions between the US and Iran have worsened since Washington withdrew last year from Joint Comprehensive plan of Action (JCPOA) between Iran and several world powers, and re-imposed sanctions on Tehran.

In this regard, some experts believe that Japan did not play much role in the diplomatic arena after World War II, and their political relations with other countries were just limited to bilateral relations. Iran should not take Shinzo Abe’s visit to Tehran so seriously on the tensions between Iran and the US because there are doubts about Japan’s capability to be able to act independently as a mediator after 74 years of having dependent foreign policy on the US.

To shed more light on the issue we reached out to Marvin Zonis, Professor of international political economy and leadership in the University of Chicago.

Here is the full text of our interview with him:

While President Trump repeatedly asks for talks with Iran, on Friday again in a hostile and trust killing act his administration slapped new sanctions against Iran’s petrochemical section. How do you interpret his contradictory measures?

The Trump administration is notoriously disorganized. Policies are not coherent and, in many cases in addition to Iran, contradictory policies are common. Iran policy is largely driven by Iran “hawks” National Security Adviser Bolton and Secretary of State Pompeo. I think the President would actually like talks with Iran because he fantasizes that he can “make a deal” and become (in his mind) even more of a genius than he already is. Of course, his utter failure in talks with North Korea does not suggest any positive outcome with Iran.

What reasons have motivated Japan to try to mediate between Iran and USA?

Prime Minister Shinzo Abe has sought to become Trump’s primary ally in Asia. This idea is compatible with American foreign policy that sees Japan in Asia as comparable with the United Kingdom in Europe — sort of permanent aircraft carriers off the coasts of the continents. A close relationship with the US would also be good for the Japanese economy with its massive exports to the US. If the Prime Minister could facilitate some kind of breakthrough with Iran, it would further cement the relationship between Japan and the US.

How successful can Abe’s visit to Tehran be under such situation and the Trump’s contradictory acts?

It is highly doubtful that domestic Iranian politics would allow a breakthrough to occur. While President Trump would like talks, the US has hardly treated Iran with the “respect,” which Ayatollah Khamenei has demanded.

Despite its powerful economy Japan has been following the US foreign policy in its foreign policy since the end of the World War II. How will Japan be able to affect the US decisions as an independent mediator between Iran and US?

Japan’s close ties to the US are meant to insure continued access for Japanese exports to the US as well as to guarantee US protection of Japan against any threats that may be forthcoming from China. It is well to remember that China has not in any way forgotten or excused Japanese behavior towards China during World War II as has occurred in Europe by Germany’s former wartime enemies. In Tehran, Prime Minister Abe may be able to clarify more precisely what the United States needs to do to get talks with Iran. That would be welcome by President Trump but not by Bolton or Pompeo. If Abe can pull of a miracle and actually get talks approved between Trump and Iran, the President will jump at the chance. The chances of that seem non-existent to me. The unfortunate history of Iran-US relations over the last 50 years or so with each country inflicting what each perceive as offenses against the other has made the relationship utterly poisonous.