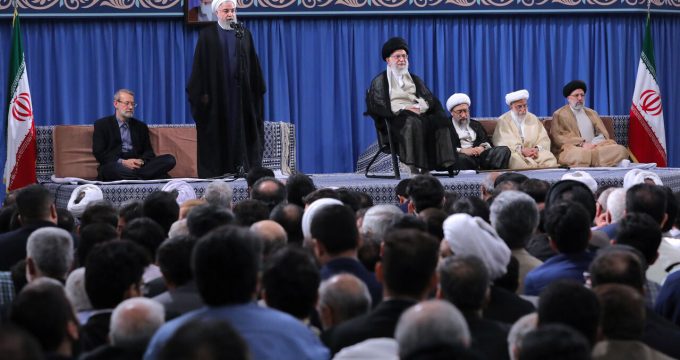 IRNA – Iranian President Hassan Rouhani said the strategic patience of the Iranian people and system foiled the US plots with regard to pulling out of the nuclear deal known as the Joint Comprehensive Plan of Action (JCPOA).

Addressing the meeting with the attendance of Supreme Leader of the Islamic Revolution Ayatollah Seyyed Ali Khamenei, officials and ambassadors of the Muslim countries, the Iranian president congratulated Eid al-Fitr, and said it is the Eid of servitude, freedom, and liberation from divine retribution.

Describing as important resistance and heroic patience against enemies’ conspiracies and plots, he said undoubtedly enemy will never be able to bring Iranians to their knees.

Referring to Ramadan as month of patience, President Rouhani said it makes people be patient in their personal, political, social and international life to prevent enemies from separating them from their aspirations.

He went on to say that the enemy did not consider patience of people and the government and as a result it always face miscalculations.

The US withdrew from international agreement to end Iranians’ patience, to force Iran pull out of the deal and to be able to impose international sanctions against Iran without paying any price, he noted.

The strategic patience of Iranian system and people foiled the US’ sinister plots regarding the JCPOA withdrawal and as a result Iran was the winner in the world political and social opinion.

Today if Iran reduces its commitments under the JCPOA, no one will be able to blame it, he said while calling for taking advantage of the JCPOA’s facilities against violators.

He added that the enemy is changing its plans in the region and also its tone against Iran, adding that these claims will not influence Iran’s determination.

If they shoulder their responsibilities, obey the law and compensate for the losses they have caused, they may face other conditions for solving the issues.