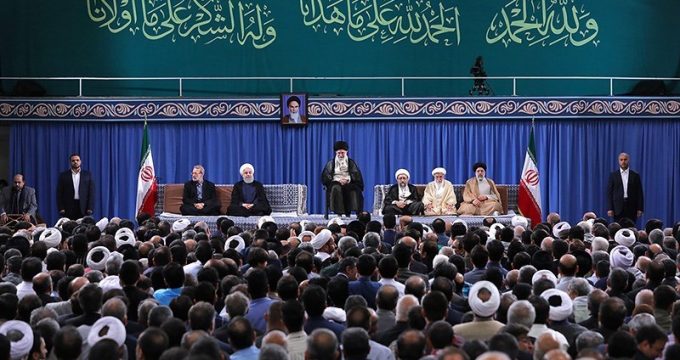 Leader: Youth soon to witness return of Palestine to its own people

IRNA – Supreme Leader of the Islamic Revolution Ayatollah Seyyed Ali Khamenei highlighted the message of Eid al-Fitr as the unity and the solidarity among Islamic countries and the revival of the notion of the “Muslim Ummah”.

The Leader made the remarks when he received a group of Iranian officials, Ambassadors of the Islamic countries and various sectors of the people on Wednesday on the auspicious occasion of Aid al-Fitr.

The leader of the Islamic Revolution stressed the solution to the Islamic world’s today problems lies in a return to the instructions of the Holy Qur’an where it instructs believes to “To be forceful against the disbelievers, merciful among themselves.”

He said the Islamic intellectuals and scholars have a significant duty in fulfilling this demand.

The Islamic Revolution’s Leader also congratulated participants on the Eid al-Fitr occasion and referring to enemies’ plans to create divisions, war and conflict among Muslims, urged Islamic countries to unite against the criminal presence of the usurper enemies in Palestine, instead of facing each other.

Ayatollah Khamenei, while advising certain Islamic countries that seek reconciliation with the Zionist regime and heat the difference, insisted on the need for them to repent from their wrong paths.

Ayatollah Khamenei went on to question such evil phenomena as the existence of two groups in a Islamic country like Libya who kill each other.

He said why a country which claims following Islam should bomb Yemeni people, destroy its infrastructures and act according to the will of enemies.

The Supreme Leader also called the Palestinian issue as the first topic of the Islamic world and lambasted some Islamic countries for aiding the United States and the Zionist regime to achieve their goals.

The Ayatollah highlighted that the Islamic Republic of Iran, from its outset, emphasized the importance of defense for the Palestinian people and stood against the world of arrogance.

Iran will continue to do so, he underlined.

Emphasizing that the eventual victory belongs to the Palestinian people, the Leader of the Islamic Revolution reiterated that the Islamic Republic’s views stand in contrast with those of some of the old Arab leaders who believed Jews should be poured into the sea while Iran believes that the all-out struggle of the Palestinian people should continue in the military, political and cultural dimensions until the usurpers succumb to the will of this nation.

Ayatollah Khamenei stressed the idea proposed by the Islamic Republic of Iran on need for holding a referendum with participation of the Palestine’s Muslim, Christian and Jewish residents as well as Palestinian refugees within the framework of the country’s governing system.

Before the Supreme Leader’s remarks, President Hassan Rouhani outlined the blessings of the holy month of Ramadan which he described as the month of patience, self-renewal and prosperity and said it is a period which helped grow the political and international resistance of the nation against the enemies.

He emphasized that the strategic patience of the Islamic system and nation of Iran after the US withdrawal of the JCPOA, disrupted the enemies’ calculation and noted that now, after a year of strategic patience, if Iran decided to reduce its commitments step by step, no one in the world could blame it because Tehran was determined to use the advantages of the nuclear deal against the countries which violated it.”