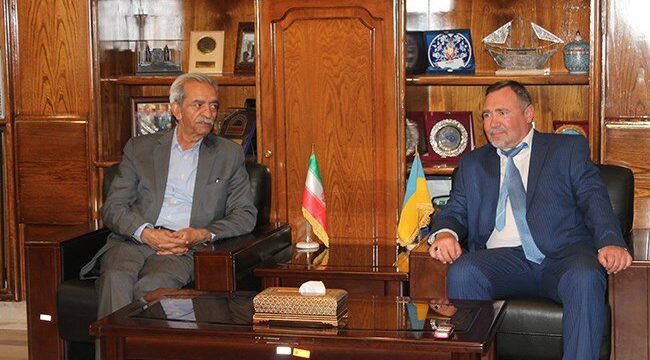 Tehran Times – In a meeting between Gholam-Hossein Shafeie, the head of Iran Chamber of Commerce, Industries, Mines and Agriculture (ICCIMA), and Serhii Burdyliak, Ukraine’s ambassador to Iran, the two sides explored the ways for boosting cooperation between the two countries’ chambers of commerce, ICCIMA news portal published.

In the meeting held in Mashhad on Friday, Shafeie mentioned the potentials available for the expansion of economic transactions between the private sectors of the two countries in a bid to strengthen Iran-Ukraine economic relations.

“Some measures have been already conducted for boosting agricultural cooperation between the two sides. Your country enjoys high potentials in this field which could be a proper ground for more bilateral cooperation”, the ICCIMA head noted.

The official also stressed the need for the expansion of ties between the provinces of Iran and Ukraine.

Burdyliak for his part welcomed expansion of cooperation between the provinces of the two countries and said that some provinces of Ukraine have strong chambers that can set up relations with the Iranian chambers.

He also said that the head of Ukraine’s Chamber of Commerce is willing to visit Iran again.