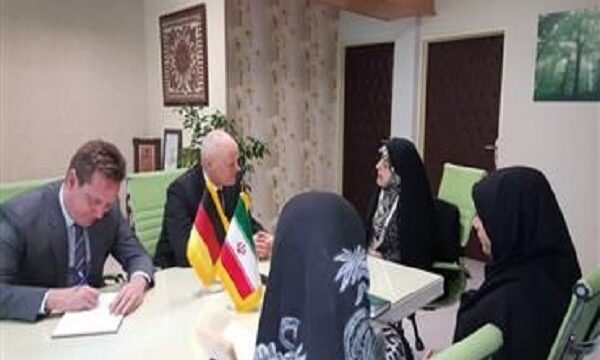 MNA – German Ambassador to the Islamic Republic of Iran Michael Klor-Berchtold said on Sunday that his country fully supports Iran over the case of the Joint Comprehensive Plan of Action (JCPOA).

He made the remarks in his meeting with Vice President for Family and Women’s Affairs Masoumeh Ebtekar in Tehran.

Germany believes that Iran’s expectations should be met and that the good picture of Iran should be displayed for the world, he added.

For her part, Iranian Vice President for Family and Women’s Affairs Masoumeh Ebtekar pointed out that Iran and Germany can establish amicable ties in the field of economic empowerment of women.

US sanctions imposed on Iran have had negative effects on the Iranian economy, she emphasized, noting that the women of the country have not abandoned their economic efforts.

She pointed to the significance of the role of women in the economy and said, “despite various sanctions imposed against the country, Iranian women accounted for 75 percent of production share of handicrafts.”

Ebtekar called on European countries to adopt logical measures in the case of JCPOA, adding, “Islamic Republic of Iran is seeking peace, security and stability in the international level.”