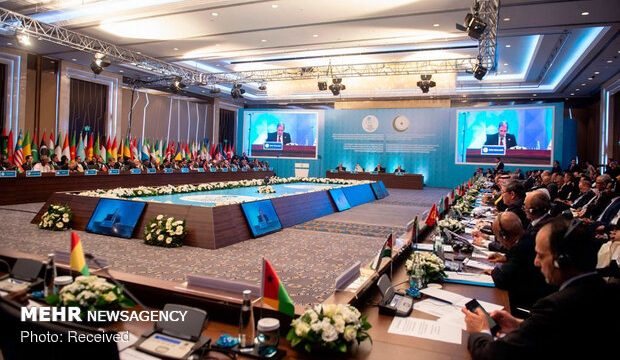 MNA – Syria rejected the statement issued after Mecca-hosted summit of the Organization of Islamic Cooperation (OIC), saying it is an unacceptable interference in the internal affairs of Syria.

Persian Gulf and Arab leaders convened at two emergency summits on May 30 in Mecca, hosted by Saudi Arabia’s King Salman. The Saudi foreign ministry cited reasons for the summits as “sabotage attacks” on four oil tankers, including two belonging to Saudi Arabia, off the coast of Fujairah in the UAE, as well as the retaliatory drone strikes carried out by Yemeni army forces on two major oil pumping stations in the Kingdom.

The statement released at the end of the summits echoed unfounded claims against Iran and called for collective efforts to thwart the Islamic Republic’s influence in the region.

In this regard, the Syrian government has rejected a final communiqué issued following the 14th summit of the Organization of Islamic Cooperation (OIC) in the Saudi city of Mecca, describing the presence of Iranian military advisors in the conflict-plagued Arab country as “legitimate and lawful.”

“Syria dismisses what was declared in the final statement of the emergency Arab summit in Saudi Arabia regarding the Iranian intervention in Syria’s affairs, and considers what is mentioned in this communiqué as an unacceptable interference in the Syrian domestic issues,” a Syrian Foreign Ministry statement said on Friday.

“Syria reiterates that the Iranian presence is legitimate because it came at the request of the Syrian government and contributed to Syria’s efforts in the fight against terrorism sponsored by some participants in the summit.”

“The summit was to condemn the interference of other countries in the Syrian crisis, which lacks legitimacy and is aimed at providing unlimited support to various terrorist groups and prolonging the Syrian conflict.”

Meanwhile, Iraq opposed on Friday a final statement released by Arab countries that were gathered for an emergency meeting in Saudi Arabia, which leveled unfounded claims against Iran and called for collective efforts to thwart Iran’s regional influence.

Iran has also condemned the statement, saying Saudi Arabia’s attempt to rally neighboring and Arab countries against Iran is “the continuation of a futile process that the United States and the Zionist regime are pursuing against the Islamic Republic.”