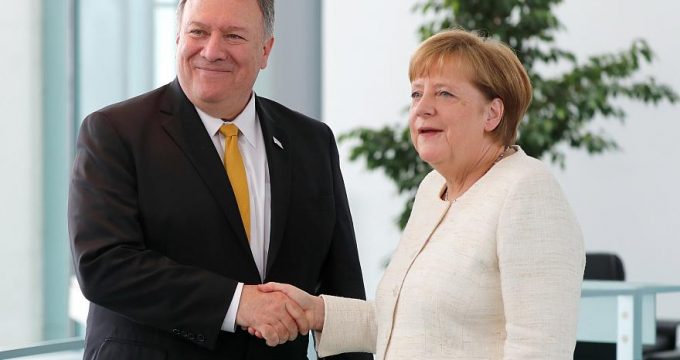 Euronews – Angela Merkel has met with US Secretary of State Mike Pompeo to discuss Iran and a host of other issues.

Pompeo began a five-day European trip on Friday with a delayed visit to Berlin, where he was expected to press Germany to boost its military spending, avoid dealings with China’s technology giant Huawei and reconsider a pipeline project with Russia.

His visit had been scheduled earlier this month but was called off at the last minute as tensions rose over Iran, another issue on which Berlin and Washington do not see eye-to-eye.

Pompeo will also visit Switzerland, the Netherlands and Britain.

Speaking to reporters before heading to Berlin, Pompeo said Germany needed to do more to meet NATO military spending commitments of 2% of GDP.

Pompeo said Huawei, which Washington sees as a threat to NATO security, would be an issue at each stop in Europe.

Pompeo and Merkel said they would also discuss the situations in Syria, Libya and Afghanistan, with Merkel telling reporters “the world is in great restlessness”.