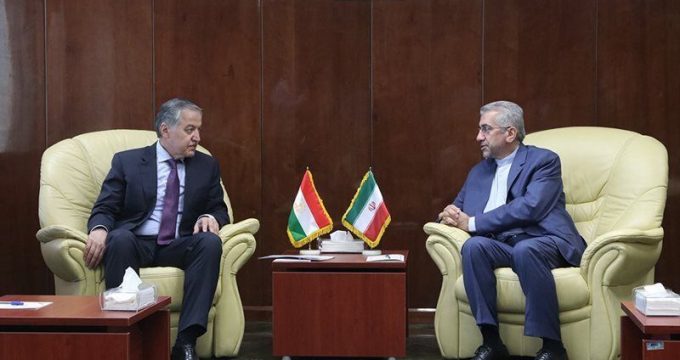 IRNA – Iranian Energy Minister Reza Ardakanian said that Tajikistan produces about 15% of hydroelectric power of the world’s total capacity and that Iran is ready to provide transit facilities for the Tajik electricity exports.

Speaking in a meeting with Tajikistan Foreign Minister Sirodjidin Muhriddin, Ardakanian stressed the importance of development of relations between two countries, saying Iran and Tajikistan enjoy strategic ties which should be utilized for the improvement of welfare and social security.

Describing Tajik minister’s trip as very important for accelerating economic cooperation, he said that thanks to the political determination of leaders of the two countries and suitable capacity of the Iranian companies for implementing Tajik government’s development plans, the Iranian and Tajik governments are expected to take advantage of all their capacities for promoting bilateral cooperation.

Referring to the fact that there are good capacities for cooperation in water and electricity fields with neighbors, Ardakanian said that Iran has developed barter trade on electricity with all countries with which it has common borders.

Tehran is after synchronizing electricity system through Azerbaijan, Armenia and Georgia to Russia, he reiterated.

He noted that Energy Ministry is now responsible for the joint economic cooperation commission of Iran, Tajikistan, Russia, Afghanistan and Armenia.

Meanwhile, speaking to reporters, he pointed to other capacities in bilateral cooperation, saying it is possible for Tajikistan to gain access to high seas through Iran.

Thanks to Tajikistan water and soil resources, extraterrestrial farming will also be possible.

In the meantime, Muhriddin called for reinforcing cooperation between Iranian and Tajik state and private sectors.

He also referred to his upcoming meeting with Iranian Foreign Minister Mohammad Javad Zarif, saying the 13th joint economic commission will convene in Tehran in the next few months.