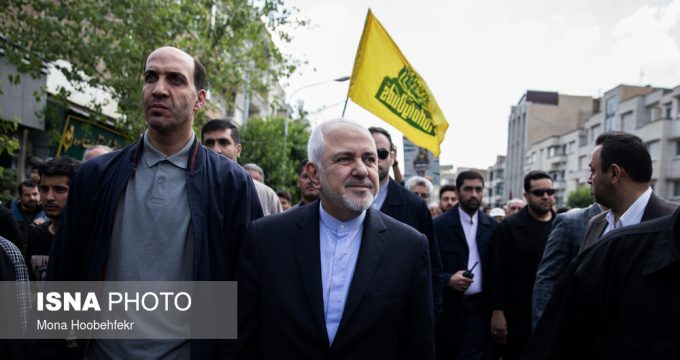 Zarif: Quds not for sale

Tasnim – Iranian Foreign Minister Mohammad Javad Zarif described the city of al-Quds as an indispensable part of Palestine that belongs to Muslims and would not be up for sale.

“Al-Quds belongs to Muslims and people of Palestine, and nobody has a right to cede the Qibla of Muslims to Americans and the Zionist regime or to take any other action damaging the aspiration of the Palestinian nation,” Zarif told reporters while attending a rally in Tehran in commemoration of the International Quds Day on Friday.

“The message of (rallies) today is that al-Quds is not up for sale,” the top Iranian diplomat underscored, stressing that neither the US nor the Israeli regime can have a claim on the Palestinian city.

Zarif further deplored a statement that some Arab leaders have issued against Iran at a meeting of the Organization of Islamic Cooperation (OIC) in Saudi Arabia, saying, “A handful of Arab rulers are under a delusion, for protecting themselves and pursuing their objectives, that if they stand beside (Israeli Prime Minister Benjamin) Netanyahu, they will be able to achieve their dreams.”

“Netanyahu has failed to support even Israel with his Iron Dome (air defense system), so how could he support those (Arab) states?” Zarif asked.

The foreign minister finally recommended the OIC participants in Mecca to serve the interest of the organization and support the people of Palestine instead of making nonsensical comments about Iran, like the last night’s stances that exhilarated Israel.