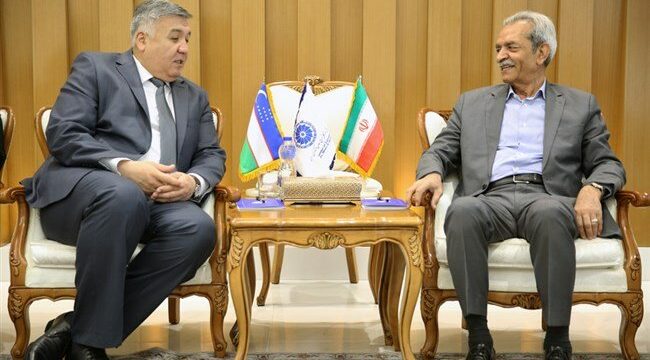 Uzbekistan eager for expansion of trade ties with Iran: envoy

The envoy made the remarks in a meeting with ICCIMA Head Gholam-Hossein Shafeie on Sunday.

As reported, in the meeting the two sides discussed several issues including establishing a joint chamber of commerce, launching direct flight between the two countries and boosting cooperation in road transportation.

The two sides also emphasized the need for expanding the cooperation between the two countries’ private sectors.

Shafeie in the meeting underlined the greet potentials for trade between the two nations and noted, “There are great opportunities for bilateral trade in both countries which have been neglected so far.”

The official further expressed readiness for dispatching trade delegations from Iran to Uzbekistan.

Underlining the need for establishing a joint chamber, Shafeie suggested that “in the meantime an arbitration office or center could be established in the two countries’ chambers of commerce in order to facilitate trade between the two sides.”

Abdullaev for his part expressed his country’s readiness for taking all necessary measures in order to boost mutual trade with Iran.

Iran and Uzbekistan have historical and cultural commonalities and hold many common stances with regard to regional and international issues.