Bloomberg | Netty Idayu Ismail: Bahrain and Oman may have missed a golden opportunity to lock in cheap foreign financing. Ever since tensions between Iran and its Arab neighbors began boiling over this month, the countries’ bonds have been leading losses across the six-nation Persian Gulf Cooperation Council. The sell-off is unwinding gains that pushed the yield on Bahrain’s 10-year dollar debt to an all-time low in April , and that on Oman’s equivalent note to a six-month low earlier in May.

If the rout has legs, the higher borrowing costs could strain the nations’ public finances, already considered the weakest in the region. Oman risks slipping deeper into junk-level credit ratings, while Bahrain’s ability to eliminate a budget deficit remains a challenge, according to S&P Global Ratings. The island kingdom plans to return to international bond markets this year for the first time since its Persian Gulf allies pledged a $10 billion aid package.

Omani and Bahraini bond spreads aren’t likely to get any tighter than the lows hit earlier this year, said Abdul Kadir Hussain, the head of fixed-income asset management at Arqaam Capital Ltd. in Dubai. 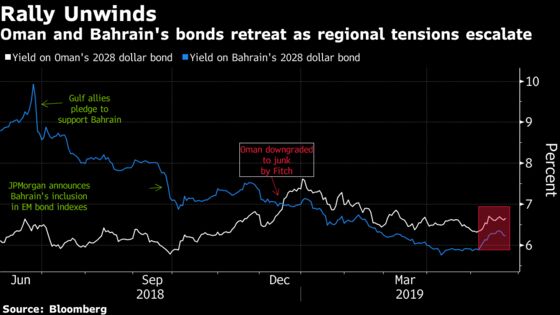 Adding to the headwinds that Bahrain and Oman face as the market turns against them, is their complicated relationship with Tehran. The U.S. stopped granting waivers to buyers of Iranian oil this month, tightening sanctions imposed on the Islamic Republic, and investors have balked at the prospect of escalating tensions in the region.

Oman has in the past facilitated talks between Iran and the U.S., while Bahrain, a small Sunni-ruled island nation, has regularly accused Tehran of stirring dissent in its Shia-majority population.

Debt issued by Oman and Bahrain has lost about 1% since the end of April, the most in the region. In comparison, returns on GCC bonds as a whole have been flat, according to Bloomberg Barclays indexes.

Franklin Templeton Investments has already cut its exposure to the nations’ bonds, according to Mohieddine Kronfol, the Dubai-based chief investment officer for global sukuk and fixed income for Middle East and North Africa. Oman is the only GCC economy that is “on a deteriorating trajectory” and Bahrain needs to put its austerity plan into action, Kronfol said in an interview earlier this month.

GCC, Iran-US tensions, US sanctions against Iran May 28, 2019
Saudi Arabia invites Qatar to talks over Iran tensions – Doha
Iranian company to expand Farzad B if Indians step away: Zanganeh