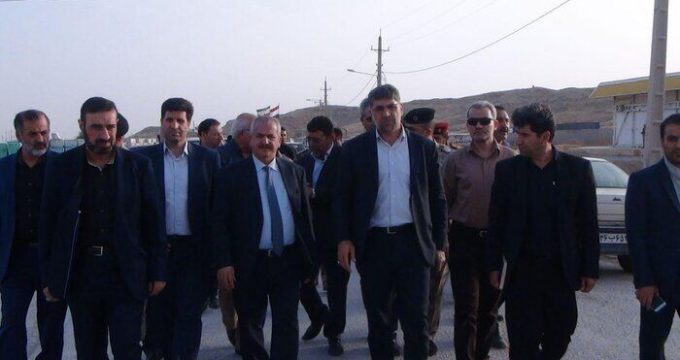 IRNA – Five-hour meeting between the Iranian and Iraqi political, security and economic officials, held at the Mandali border of Soumar in west Iran on Sunday evening, led to solving of the problems and the market resumed its activity after a one-week halt.

The head of the Iraqi’s Borders and Customs Department pointing to the existing cooperation between the two sides, referred to resolving some of the problems in the way of exporting goods through Sumar market, and noted, “At the meeting we had today, decision taken, have satisfied two parties, and the trucks and workers of each of the two countries would enjoy benefit from the market on equally-basis

Kazem al-Eqabai said that he has ordered all official and border markets in Iraq to hold synergy meetings with Iranian authorities in order to prevent any interruptions in the flow of goods.

The Director General of Iran’s Ministry of the Interior’s Official Borders Department also announced the formalization of Soumar border by the next three months and made the remark that “Soumar is considered a strategic and important border for Iran and Iraq, and the preparations for this plan have been finalized, and soon after the formalization of this border, the official goods transits will be done and the commute of passenger and pilgrims will also be realized from this border.

“Considering that the export of goods from the border of Soumar in the past few days has been interrupted, a joint meeting was held with the presence of the two sides to ensure that those who involved in export in each of the two countries enjoy their legal rights, Shahriar Heidari highlighted.

Over the past two months of the current Iranian year (beginning in March 21), $ 155 million of goods has been exported to Iraq with a weight of 145,000 tons and 7,000 truck units, up 9 percent from the same period last year.

Last year, a total of 1,313,000 tons of goods worth $ 1 billion and $ 242 were exported from the Soumar border market. The Soumar distance in the borderline of the Islamic Republic of Iran with the city of Mandli of Iraq is 15 km. The Soumar is located at 90 km from Qasr-e Shirin and has an 86- kilometer border with Iraq.