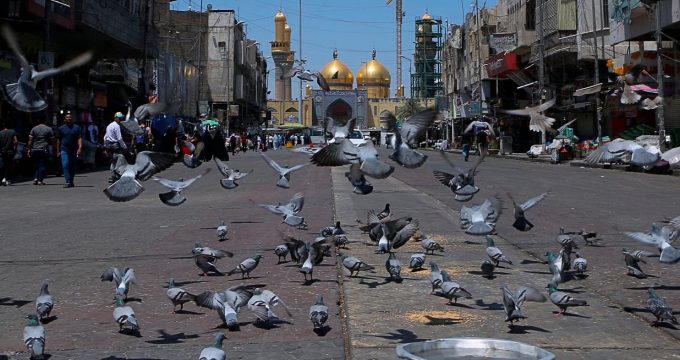 US sanctions on Iran felt in Iraqi Shia tourist districts

AP | Bassem Mroue: For years, Karar Hussein has sold sweets in his shop near the entrance to one of Shia Islam’s holiest shrines, accepting whatever currency was offered to him by his clients, many of them religious tourists from neighboring Iran. But lately, when Iranian pilgrims ask about prices, he tells them he can only sell if they pay in Iraqi currency. They often walk out, disappointed.Hussein and many other shop owners in Baghdad’s northern Shiite holy neighborhood of Kadhimiya have seen sales drop sharply over the past year since President Donald Trump began re-imposing sanctions on Iran, home to the largest number of Shiite Muslims around the world.

The value of Iran’s currency, the rial, has decreased almost fourfold, pushing the price of nearly everything beyond the reach of ordinary Iranian consumers in Iran and abroad.

Standing in his shop wearing jeans and a T-shirt, 27-year-old Hussein said his sales have dropped 30% since last year, but he still prefers not to be paid in Iranian rials because the currency’s value keeps depreciating. “Their currency is crashing,” he said.

Millions of Shiites from around the world come to Iraq every year to visit its many Shiite shrines and holy places, including the holy cities of Najaf and Karbala in southern Iraq and the central city of Samarra, home to the revered golden-domed al-Askari shrine. They bring large amounts of money into the country, where tourism is the second biggest source of income for state coffers after oil exports.

Since the fall of Saddam Hussein’s government in 2003, Iranians have made up the majority of religious tourists to Iraq, although tens of thousands come from other countries.

But tensions have been rising recently in the Middle East between the United States and Iran and there have been concerns that Iraq, whose government is allied with both Tehran and Washington, would become caught in the middle, likely increasing pressures on Iraq’s tourism sector.

A favorite tourist destination is the Kadhimiya district in north Baghdad, typically bustling with Iranians shopping for clothes, sweets and trinkets. The area is home to the al-Kadhimayn shrine, known for its two domes and four minarets draped with gold and contains the tombs of Imam Moussa al-Kadhim and his grandson Mohammed al-Jawad, two of Shiite Islam’s most revered figures.

On a recent afternoon in Kadhimiya, hundreds of Iranian pilgrims entered and left the shrine, passing by scores of shops on both sides of a pedestrian street leading to the holy site without buying anything.

“Money is a big problem for us. This is really hurting us,” said Iranian citizen Hussein Fazeli, as he left the shrine. Fazeli, who brings pilgrims from Iran to Iraq, said the number of Iranian visitors has dropped because many cannot afford to travel now.

Speaking in broken Arabic, Fazeli said Iran will end up victorious no matter how long the crisis takes, adding that “Trump will go, and Iran will stay.”

Iran’s currency has been declining steadily for years but the drop has accelerated in recent months after Trump’s decision to pull out of the 2015 nuclear deal with Iran and re-impose sanctions.

Mohammed Saadi Hadi, who inherited his tiny clothes stand outside the al-Kadhimayn shrine from his father, says sales have dropped by 70%. Prayer gowns for women now cost four times what they cost last year in Iranian currency. He used to sell 60 gowns a day but today he sells less than 10.

Thamer Jabbar, owner of a perfume store, said Iranian tourists now not only abstain from buying, but some of them bring with them items such as saffron spice and stone rings to sell in Iraq, hoping to make up for some of their trip’s cost.

Jabbar, 38, said his best days were after Iran and world powers signed the nuclear deal in 2015, which led to the lifting of sanctions on Iran and the release of billions of dollars of frozen assets. On a good day then, Jabbar would sell $700 worth of perfume.

“Today I barely sell anything to an Iranian tourist. Perfumes in Iran have become cheaper,” he said.