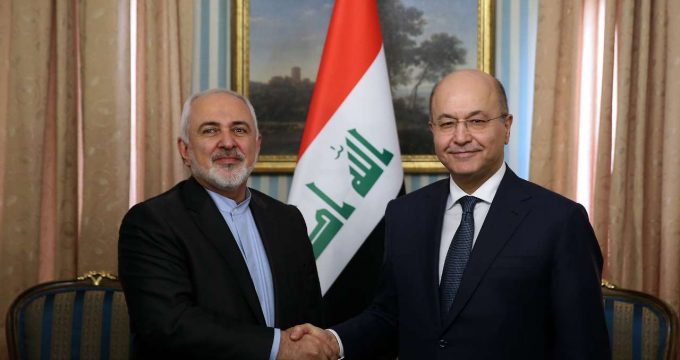 MNA – Iranian Foreign Minister Mohammad Javad Zarif and Iraqi President Barham Salih met in Baghdad on Saturday to discuss security cooperation between the two countries in a bid to help increase the stability in the region.

During the meeting, also attended by Iran’s Ambassador to Baghdad Iraj Masjedi, the two sides stressed the need to increase security cooperation between Iran and Iraq to defuse the current tensions and increase regional stability.

Salih, for his part, said boosting relations with Iran and other Islamic states is the best way for reinforcing the stability in the region and establishing balanced ties between the regional countries, especially the neighbors.

The two also reviewed the latest regional developments as well as bilateral ties and stressed finding a constructive solution to the regional issues.

Upon his arrival to Baghdad earlier in the day, the Iranian diplomat met and held talks with Iraqi Prime Minister Adil Abdul-Mahdi.

According to the public relations office of the Iraqi premier, the officials discussed the recent regional developments, especially with regards to the 2015 nuclear agreement (JCPOA) and Iran’s recent countermeasures against the US’ unilateral moves.

The diplomats noted that both Iran and Iraq have been affected by US sanctions on Tehran, which began following the US government’s withdrawal from the JCPOA last year while stressing that the deal should be preserved despite Washington’s hawkish moves.

The report said that parts of the meeting were dedicated to a review of efforts in Iraq and Iran to follow up on the agreements signed during a recent trip of Iranian President Hassan Rouhani to Iraq and the last year visit by Abdul-Mahdi to the Iranian capital Tehran.

Zarif’s visit to Iraq comes within the framework of Tehran’s consultations with regional partners.

Earlier this week, Zarif visited Islamabad to hold talks with senior Pakistani officials on bilateral ties, and last week, he traveled to Turkmenistan, India, Japan and China as part of his outreach to the regional countries to boost the mutual cooperation with them amid the growing tensions between Washington and Tehran.