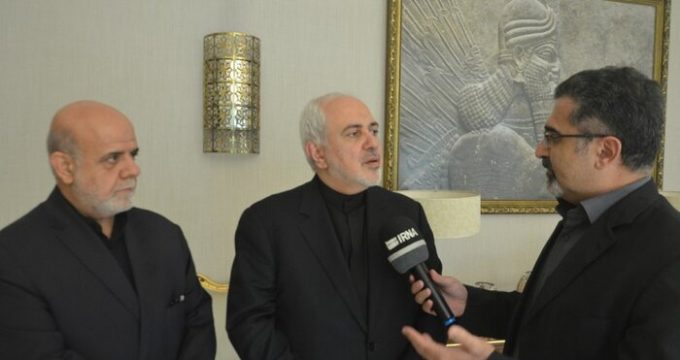 IRNA – Iran’s stance is based on an approach seeking peace, stability and progress for all countries, Iranian Foreign Minister Javad Zarif said on Sunday.

Speaking to Islamic Republic News Agency (IRNA) at the end of his visit to Iraq, the Iranian foreign minister said, “Our message and preference is quite clear. We are interested in peaceful prosperous life. This is the choice of Islamic Republic of Iran, but the peace and prosperity should be provided to all.”

Zarif arrived in Baghdad on Saturday to hold meetings and talks with senior Iraqi officials on the latest developments of the world and the region as well as bilateral talks.

His third visit to Iraq comes amid a series of military moves by the US in the region.

The foreign minister said that Iran’s message to all European countries and other economic partners is that if they do not stand against the US bullying, and if Iran’s interests are not secured, all parties would bear the brunt.

Iraq as a friend country, is active in the region and this is a positive development for Iran, Zarif said, noting that the threat caused by the US ‘economic terrorism and war’ was raised at the meetings with Iraqi officials.

He emphasized that the only solution to the current stalemate is that the US stop its hostile acts against Iran.

“The US should put an end to this situation, and the rest of the world should be aware that if they want to enjoy peace, they should make sure that the Iranian people are benefiting under the nuclear deal,” Zarif said speaking of the ‘message’ conveyed to Iraqi officials.

Commenting on the latest stance of Iraqi government amid the recent US moves, the Iranian foreign minister emphasized there was no need for mediation of third parties, “but the measures and support by Iraqi friends are welcome and appreciated.”

The US status is clear, it is a violator regime that has breached its international commitments, and has also forced others to evade their own commitments, he said, adding that the tradition should be stopped.

The top Iranian diplomat said that about dredging of Arvand Rud, known as Shat Al-Arab in Arabic, and the issue of visa, there have been some progress, but some other initiatives such as Basra-Shalamcheh railway, only preliminary steps have been taken.